The Liverpool Law School’s Annual Public Lecture by Mr Justice Cobb, Judge of the Family Division in the High Court

Sir Stephen Cobb, Judge of the Family Division in the High Court and graduate of the University of Liverpool, revisited the Law School to address staff, students, alumni and guests. In a lecture entitled “To no one will we sell, to no one will we deny or delay right or justice”, taken from Clause 40 of the Magna Carta, and currently celebrating its 800th anniversary, Sir Stephen reflected upon the impact of the Legal Aid, Sentencing and Punishment of Offenders Act 2012 on access to family justice.

Sir Stephen considered the Act’s impact, in light of Articles 6 and 8 of the European Convention on Human Rights, on those experiencing family breakdown, on family courts and on other public bodies and services. He discussed what the future holds for dispute resolution and the roles of various key parties, including the judiciary, the child in family cases, the voluntary sector and law students; important themes affecting the work carried out in some of the School’s Research Clusters and Law Clinic. 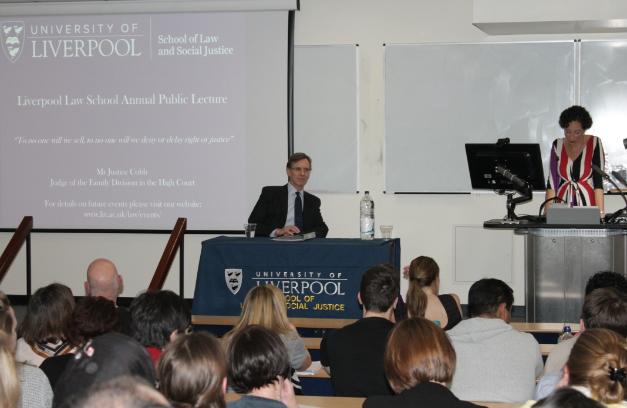 Sir Stephen Cobb was appointed Justice of the High Court in 2013. He won the prize for Family Law QC of the Year at Jordan Publishing's Family Law Awards 2012 and was a specialist family law barrister for over 20 years. He became a QC in 2003, specialising in law relating to children and is regarded as one of the leading Family Law silks.

Sir Stephen has always shown a keen interest in academia and has written many published book chapters and scholarly articles around family and child law. He has also contributed to texts on Essential Family Practice (ed, 2000, 2001 and 2002), Clarke Hall and Morrison on Children (ed, 2006-09) and Halsbury's Laws of England Vol 5(2) (contrib).

Watch the full lecture on the video below;