The project incorporates field schools and training excavations that focus on research about Iron Age, Romano-British, post-Roman, medieval and post-medieval (historic) archaeology. Work is based at Castell Henllys and other sites in the region.

Castell Henllys is an award-winning interpretative archaeological site with reconstructed roundhouses based on the excavated evidence. Here, archaeological research, training and public interpretation are combined in a unique way.

Harold is fascinated by the ways in which experimental reconstruction of timber roundhouses can throw light on the excavated prehistoric remains of such structures discovered across the whole of Britain, and the Iron Age lived experience.

The excavations at Castell Henllys led to a monograph (Monumentality in Late Prehistory: Building and Rebuilding Castell Henllys Hillfort, Springer 2013) and ongoing research on the artefacts and changes in settlement layout that is revealing a complex narrative of change during the later Iron Age and Roman periods.

Recent research has included collaborative community excavations with Dyfed Archaeological Trust in 2017 and 2018 of roundhouses built 35 and 30 years ago respectively, commissioned by the site managers, Pembrokeshire Coast National Park. These investigations of long-term reconstructions, built using the excavated data from buildings on those original sites, uniquely demonstrate roundhouse biographies and use-lives of relevance to those investigating later prehistoric settlements across the country. 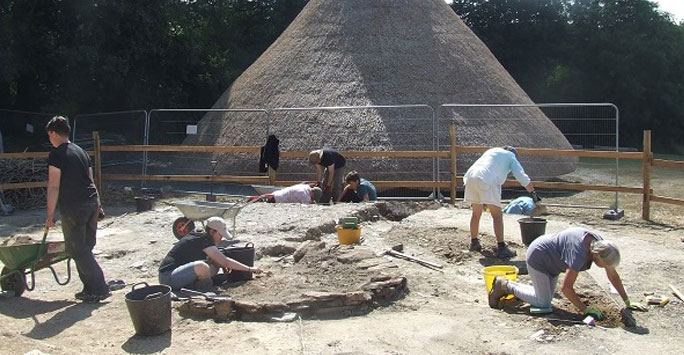 Harold combined the results of the 2017 excavation with his research experience on reconstruction to advise on the new design of one roundhouse, which is now completed and an integral part of the site interpretation. He is at present advising on the 2018 roundhouse reconstruction design. This building will act as the key inside teaching and learning space for the schools’ programme on the site; it will be completed during the first half of 2019.

Working collaboratively with the staff of the Pembrokeshire Coast National Park, the continuing new data from interpreting the excavation archive and associated artefacts is generating data which is being incorporated in a new phase of public interpretation and schools’ education programmes at Castell Henllys.

New interpretive facilities in the valley adjacent to the hilltop site are being designed, and Harold’s research results will enable these to present an up to date interpretation of the Iron Age and subsequent Roman native occupation of the site, and the social and economic changes over the 1,000 years of the site’s occupation that have not been explained to the public before. He is selecting artefacts from the site to go on display, and providing text to allow them to be understood by the public. As a key economic driver for the regional tourist industry, the enhanced heritage attraction at Castell Henllys will ensure that the Pembrokeshire Coast National Park can continue to support this local ‘honeypot’ site.

One unexpected research result of the excavations was the discovery of the amount of plastic debris incorporated into the buried environment – even within a heritage site where the staff maintained a tidy ‘authentic’ Iron Age appearance.  An interior display and schools’ resources showing the ubiquity of plastics in the environment under our current lifestyle, using the Castell Henllys excavations as the example, are being designed.

The public thoroughly enjoyed learning about the house, the site and the Iron Age. Showing the amount of plastic found helped bring home the impact of plastic on the landscape and that everyone must do their bit to reduce plastic use

Back to: Department of Archaeology, Classics and Egyptology