Egyptology MA student Alice Baddeley reflects on her opportunity to visit the storeroom of Liverpool's World Museum as part of her Masters study.

Being invited to a tour of a renowned museum’s storeroom is every self-professed history nerd’s dream. As part of my Masters in Egyptology, I got to do just that. The stores of the World Museum are home to objects ranging from ceramics, metals and organic material and the relationship between the university and the museum means researchers, including the staff, make great use of this. Our guide was Ashley Cooke, senior curator of Antiquities at the World Museum, who was also a student of Egyptology at Liverpool!

Our module, ‘Research Designs in Egyptology’, is intended to foster thought on Egyptian collections in museums and how these can be used for research in multiple ways both in providing information about the ancient world and on the early history of our discipline. Ashley demonstrated this with a range of pottery that was brought to the museum through 19th century excavations in Egypt. At this time, many museums were not used to the ‘realities’ of excavated objects, where less spectacular finds are the norm, and Ashley recounted the World Museums disappointment in being sent pottery that they judged to not be worth displaying. These pots stood opposite a range of very fine Greek pottery which demonstrated Ashley’s point very well as the elaborately decorated Greek pots were the sort of object that Museums expected to receive at the time.

In the early 19th century, it was not unusual for visitors to go to Egypt with the intention of collecting for themselves, or on behalf of others, antiquities which later entered museums. Ashley showed us objects once owned by Florence Nightingale who went to Egypt in 1849-50. Included in her collection were authentically ancient artefacts and a fake. Among them, was a funerary cone inscribed for Merymose, a Kings son of Kush which was a real thrill for me to hold and examine as I had recently researched the cones for an assignment and have been busy learning to read Middle Egyptian, a particular strength of the department, so I could make out parts of the inscription after just five months of learning! 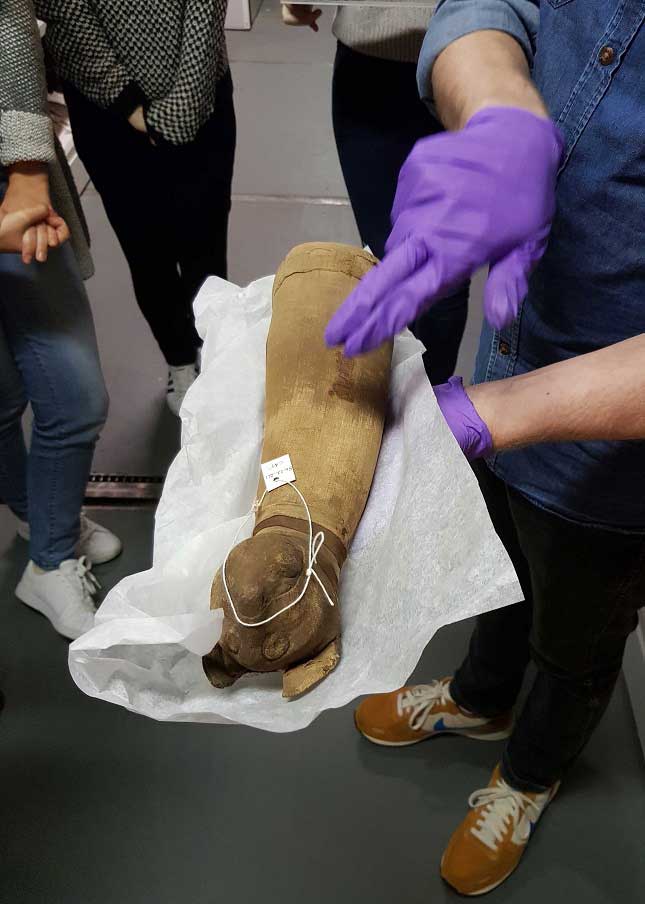 Amongst the objects were a group of famous cat mummies… These were originally from Speos Artemidos in Middle Egypt and came to Liverpool in 1890, unwrapped, to be sold as fertiliser with a few going to the museum. This caused a moral debate amongst Victorians cumulating in a cartoon featuring the ghosts of the cats in Punch magazine. Animal mummies are a student favourite on these trips, and we were lucky enough to examine this elaborately bandaged cat mummy.

This trip was one of the many highlights of my degree as the opportunity to physically handle artefacts you have studied is immensely gratifying. It was great fun using our phones as torches to pick out details on a wooden Old Kingdom coffin that had, amazingly, survived the Blitz of 1941 and to hear how the galleries have changed over time.