Georgia Hetherington, second-year BSc Archaeology student, recently had the trip of a lifetime during a three week excavation in Alaska. Read her blog and discover some of her amazing experiences.

After a long journey consisting of four flights I arrived in Quinhagak on the 29th of June. After only an hour or so of being there I was taken out to the archaeological site Nunalleq to see what I would be uncovering over the next three weeks. The first few days I was there we all worked hard to remove top soil of what was listed as the T-block. Luckily for us the weather was brilliant, it was sunny with a breeze meaning minimal amounts of mosquitos to get in our way.

The village of Quinhagak is very isolated, it can only be accessed via plane or barge due to the area being surrounded by marshland. I lived in a small room with one bunkbed and shared with a lovely girl called Lauren from America. The room had a window which was a luxury as most of the other rooms were in complete darkness, however due to it being constantly light outside it was sometimes hard to sleep. We had two toilets available to use, which was handy as more often than not one of them wasn’t working. We also had two showers, one of which was located in the store and the shower was in fact a hose. My alarm was set for 6:45 every morning as breakfast was served at 7:30 and work began at 8:30. We had two local women called Mary and Diana who cooked amazing breakfast and dinner for us Monday to Saturday.

One of the best parts of my trip to Alaska was my interaction with the locals and them introducing me and others to their way of life. I got taught how to fish for salmon (which is harder than it looks), and experienced a maqii, which is essentially a sauna but it’s the hottest one I’ve ever experienced! 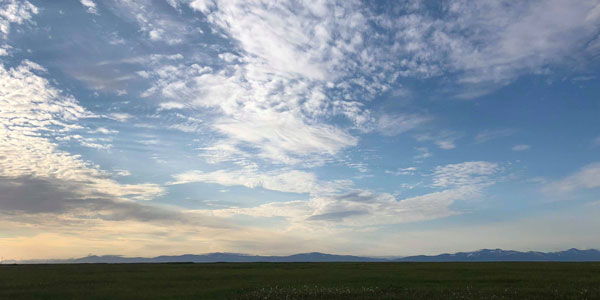 The view from the lab in Quinhagak.

The site over in Quinhagak is one of the most exciting sites I have ever had the experience to work on. Due to the permafrost, artefacts dating over 400 years old were found perfectly preserved. It was so exciting to dig through the layers and uncover the history. I found the bones really interesting there and I had the opportunity to excavate a dog that was around 400 years old itself. It was well preserved with plenty of fur.

It is a really special site in that we never know what to expect but we know it is always going to be amazing. Some of the best finds include wooden masks, bentwood bowls, spoons and carved ivory. The site itself was a house dating to around c. 1500 – 1600. There is more than one house floor meaning that some things are dated later than others but using chemical analysis we are able to determine these dates. 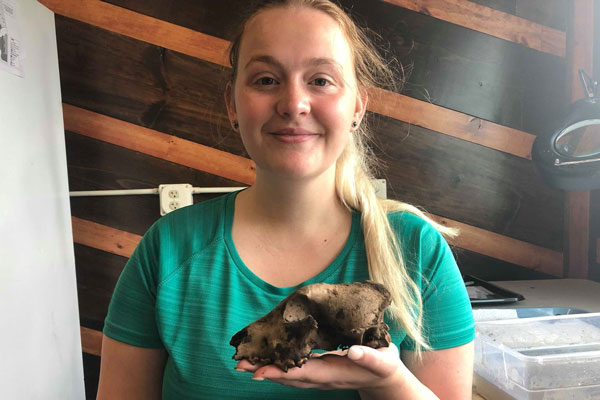 I had the pleasure of working alongside Francis, Kostja, Amanda and Ellinor in the lab where we would carefully clean each artefact and store it ready for them to be presented to the locals at a later date. While in the lab, we were often visited by an elder called John who would help give insight as to what artefacts were used for.

The story behind the site dates back to what is called the bow and arrow war. This is when there were more people than the land itself could support so there was a fight for land and occupation. The story goes that a woman was kept captive and overheard plans of people living in the house we were excavating, and nearby, planning an attack. This woman escaped and went back to her people and warned them of the incoming attack, so they were well prepared. They successfully killed all the men that had set sail to attack them. Then out of revenge they went to the houses of the families of the men who planned the original attack and also killed them. We have found plenty of arrows on the site to support this.