The distinction between rational therapy and the use of rituals and incantations is a modern prerogative. Such a separation does not apply to ancient Egypt: medicine and magic are two main constituents of the same process, aimed at preserving life through the prevention and cure of illnesses (Pinch 1994). Constant threats in the form of ferocious and poisonous animals challenged the Egyptians’ daily life.

In this regard, the Horus cippi or ‘Horus on the Crocodiles’ stelae are fascinating religious objects that became particularly widespread at the end of Late Period until the Roman Period. Archaeological collections around the world hold large numbers of cippi of different craftmanship, size, and quality. Their exceptional survival into the present day speaks of their past popularity and high demand. Small size examples were carried around as portable amulets or kept in houses, while larger and more skilfully crafted versions belonged to temples’ complexes and the elite.

The common feature of all cippi’s iconography is the motif of young Horus - the so-called ‘Horus The- Child’ - whose Greek counterpart was Harpocrates. On the recto, Horus is depicted with child-like characteristics. He is naked; his belly and breasts are prominent, and he wears his hair in a sidelock. His arms are open while he holds a variety of dangerous animals such as snakes, scorpions, and lions. He stands on top of crocodiles, while Bes – the dwarf deity with leonine features who protects the Egyptian households - crowns his head (Ritner 1989). The rest of the cippi’s surface as well as their verso is generally covered with hieroglyphs. The quality and accuracy of these inscriptions could transform the stelae into outstanding works of art as in the case of the famous Metternich Stela. Regarding portable amulets, the hieroglyphs often appear clumsy, and error ridden: because hieroglyphs were deemed magically powerful per se, their content was less important than their physical presence. 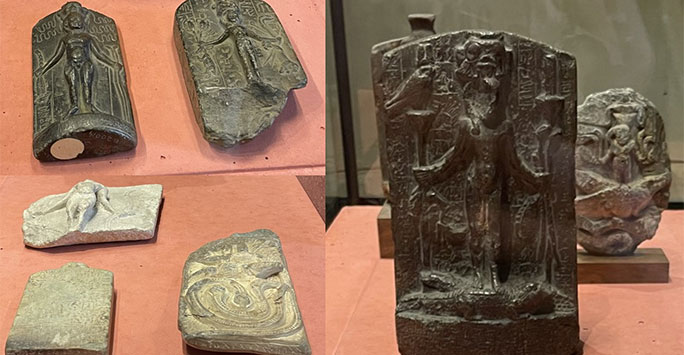 The choice of Horus as protection from the attacks of feral animals is not accidental. According to the myth, when Isis and the infant Horus were hiding in the marshes, the child became ill. The god of wisdom – Thoth – assisted Isis and cured Horus by reciting spells. As a healed victim of dangerous animals, ‘Horus The Child’ guarantees health and protection against their bites. With regards to their iconography and ideology, the Horus cippi have their predecessors in the so-called Shed stelae. Shed – “The Saviour” - is a male god depicted in profile, holding dangerous animals in his hands, on stelae dated from the New Kingdom to the Third Intermediate Period. These round-topped examples were regarded as an expression of personal piety and displayed healing properties against illnesses and wild beasts. This recurrent motif of a deity taming animals did not disappear with the downfall of the Egyptian religion. A similar depiction is present in the pilgrim’s ampoules of an early Christian martyr, Saint Menas of Egypt. These objects, dating from the 4th to the 7th centuries AD, were used as containers of water and holy oils (Weitzmann 1979: 573-578). The saint is shown wearing Roman clothing; his arms are outstretched, and he is surrounded by animals and crosses in an iconography which evokes Horus’s appearance in the cippi.

How were the cippi used? Water was key to prevent bites or cure their results. In the case of large cippi, the liquid was poured over them to absorb the power of their formulae and illustrations. When someone was bitten or stung, the ritually charged water was drank to partake of Horus’ magic. Small size cippi could be completely submerged in water which would then be consumed. Some amulets reveal signs of rubbing, indicating the possibility that they were massaged against the wound or kissed. In the story of Isis and the 7 scorpions, the following spell is found:

“Let the child live and the venom die! As Horus will be cured for his mother Isis, so will those who suffer! This is a (compress/bandage) made of spelt bread which effectively exorcises the venom. This is natron and burning garlic extract that exorcise lames from limbs.” (Allen 2005: 62)
This indicates that more practical methods - such as the sucking out the wound and the application of unguents and wrapping - accompanied the “water” ritual. 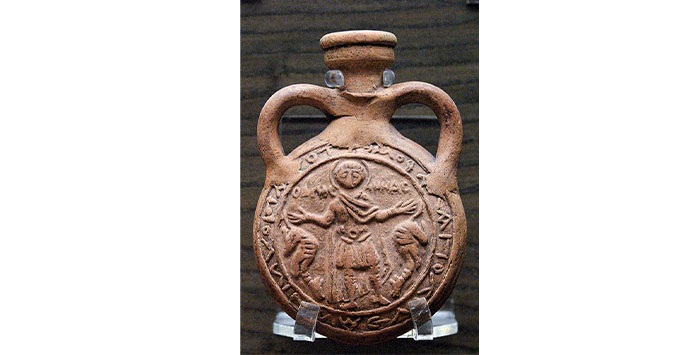 Egyptian magic relied on the effectiveness of the spoken word and its performativity to achieve a desired effect on the patient. The use of language and amulets played a major role in the healing process. A pharmacopoeia of drugs bore an additional curative value to the relief of symptoms. Medicine and magic were equally relevant in the struggle for the preservation of life.