This February in the department we have been reflecting about LGBT history, not least following the wonderful lecture by Prof Lloyd Llewellyn-Jones on Alexander the Great. In this post, Dr Ben Cartlidge dwells on a puzzling feature of the ancient Greek evidence for male homosexuality.

The inspiration for this came out of the paper I gave last term at our Classics and Ancient History seminar, entitled ‘Just friends? Sexuality and linguistics in Bronze Age Greece’. This post is not a recap of the paper, but an initial statement of a puzzle I came across in the research for it. The paper was focussed on the figure of Achilles in the Iliad; this post is focussed on the figure of Achilles in art and literature of the fifth-century B.C.

The classic work on Greek homosexuality, Kenneth Dover’s recently reprinted book of the same name, constructs a visual grammar of ancient Greek male homosexuality. Dover was able to point to a series of vases on which homosexual male courtship is conducted using a particular set of gestures. Such gestures include reaching down towards the younger partner’s genitals while touching his face with the other hand; the gift (of a hare, a cockerel, a fox, or a dog); garlands typically appear in such scenes, whether intended as gifts or as indications of a ‘festival’. The partners, usually of different ages (the older erastes, the younger eromenos), look sometimes directly at each other; in others, the younger partner looks away.

Some of these features receive a certain amount of textual support. For example, the chorus of birds in Aristophanes’ play Birds sing: ‘Lovers [erastai] have parted the thighs of many nice boys – those at the end of their youth who’d sworn off that sort of thing – and they have done so by our power, one giving a quail, one a waterfowl, one a goose, one a cockerel’. The images, then, at least correspond to a certain kind of elite portrayal of homosexual encounters. 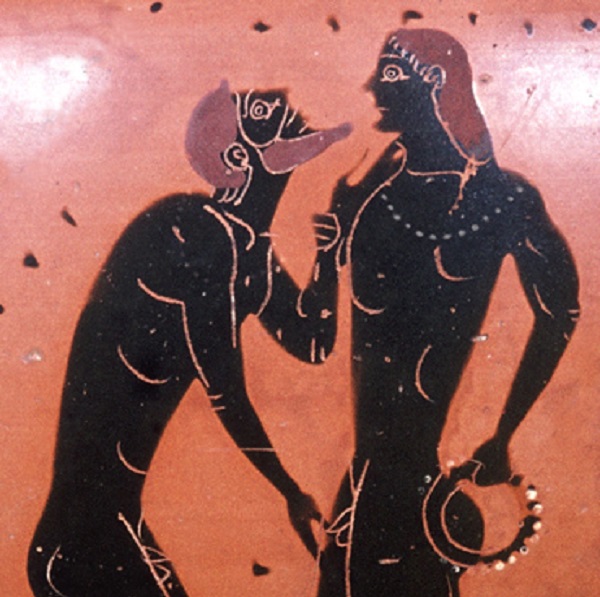 Fifth-century culture had immense interest in relating heroic narratives of earlier periods to their own time - in fact, they were engaging in what we now call ‘reception’. It is therefore no surprise that the nature of earlier relationships was a matter of interest. For instance, the character Phaedrus in Plato’s Symposium has the following to say about Achilles and Patroclus (179e-180b):

‘And Aeschylus talks nonsense when he says that Achilles was the lover of Patroclus; for he excelled in beauty not Patroclus alone but assuredly all the other heroes, being still beardless and, moreover, much the younger, by Homer's account.’

Phaedrus is quite right that Homer claims Patroclus is older than Achilles (Iliad 11.785-90). The context in which Aeschylus is likely to have said this is in his Myrmidons, of which we have only a few surviving fragments, including however one which reads: ‘You abjured the sacred companionship of the thighs, you spurned a profusion of kisses!’ (fr. 135 Radt). The context is sadly missing, but it is usually assumed that Achilles is the speaker. It seems, then, that Aeschylus, Homer, and Plato all have somewhat different opinions about the Achilles / Patroclus relationship.

This is a neat illustration of the importance of taking visual and textual evidence together: examining visual evidence would not show us the debate about the Achilles / Patroclus relationship; but without visual evidence, it would be hard to test what the texts tell us about fifth-century Athenian sexuality.