Classics and Ancient History seminars this semester: Sicily and rhetoric

The Classics and Ancient History seminars this semester have got off to a great start, with the emergence of a surprise emphasis on Sicily in our first two seminars.

It was great to welcome our first philosopher in a long time – Dr Simon Trépanier from the University of Edinburgh. He triggered one of the liveliest post-seminar discussions I have ever seen with his fascinating paper on the afterlife in Greek thought, entitled ‘Life in Hades and Astral Apotheosis in Pindar’s Second Olympian Ode: Theron the Pythagorean?’. The texts he spoke about – Empedocles, Pindar, and Plato’s Phaedo – are a great collection to get you thinking; as a sample, here is my translation of a famous fragment of Empedocles (fr. 17.1-8 D.-K., continued by the Strasburg Papyrus):

‘I speak a double tale. At times One grew to be a single thing from many, at other times again the Many came to be from one. Double the creation of mortals, double their passing. The collection of All gives rise to and destroys their creation, but destruction, having been nurtured, flies apart as they grew apart again. And these things never cease their continual change, sometimes coming together, All into One, by the action of Love, sometimes being borne apart from each again by Strife’s hatred.’

Pythagoras, Empedocles, and Theron were all Sicilians, while Plato visited Sicily and spent time at the court of tyrants there. So Simon’s paper whetted our appetites for more about the intellectual and historical context of Sicily. And it was a pleasure to welcome as distinguished an ancient historian as Tim Cornell, Emeritus Professor of Ancient History, the University of Manchester. Tim appealed to my own great interest in fragments – not surprising for the editor of the mammoth ‘Fragments of the Roman Historians’ (in three volumes). His paper, ‘Timaeus and the Romans’, was a fantastic introduction to the world of fragmentary Greek historiography, looking at a major Sicilian figure who witnessed first-hand Rome’s rise in the third century from a Western Mediterranean perspective. 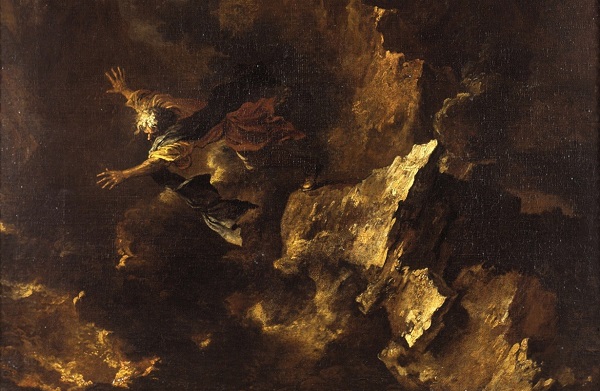 The philosopher Empedocles, said to have committed suicide by jumping into the crater of Mt Etna, Sicily (Salvator Rosa [Public domain])

Our third seminar was from our own Bruce Gibson, who let us see into the workshop of his commentary writing on Pliny’s Panegyricus. Bruce set us some textual problems to solve, and the resulting discussion was great fun as we grappled with the logic of the text at close quarters.

These three papers showcase different ways of approaching the ancient world – from the vital minutiae of textual criticism and discussion of the mechanics of argument, through the history of ideas revealed by centuries of ancient textual production, to the reconstruction of historical actions through textual and other sources. We’re no doubt in for more excitement in the second half of the semester, which features ancient theories about noses, Terry Pratchett, video games, Italian literature and military wives.