Terracotta warriors on the march

With the launch of the World Museum's 'China's First Emperor and the Terracotta Warriors' exhibition this week, Professor Douglas Baird provides an insight into the historical context of the Warriors and highlights their significance in today's world.

Of course we knew from Chinese historical texts that Zheng, the first ruler of the Qin dynasty created a super-state covering the heartland of ancient China, a process completed in 221 BC, and rightly deserves to be thought of as the first of a series of great Chinese imperial dynasties. The texts of the historian Sima Qian, also underlined Zheng’s major building programme that included a massive tomb, which had at its core his burial place and a scale representation of the territories his armies controlled, including supposedly mercury representations of the 2 great rivers at the heart of his kingdom, the Yellow river and Yangtze. Actually the heart of the tomb has not yet been excavated. 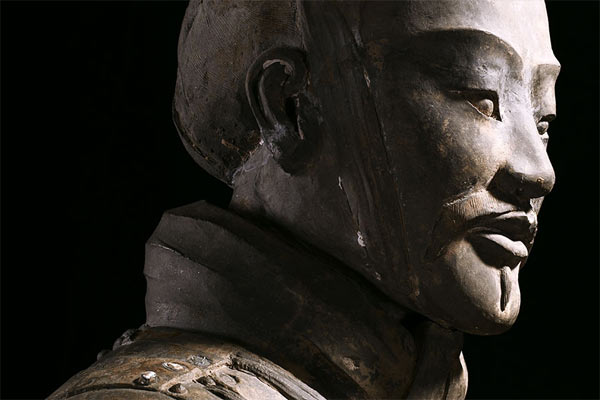 So the discovery of the Terracotta Army did not provide a dramatic new and unexpected insight into the earliest state prefiguring modern China, but rather confirmed the amazing scale and grandeur of the vision of the first emperor, that without this evidence, the textual account might have been presumed to inflate. As well as an enormous statement of the power of this first emperor, his consciousness of the importance of a sophisticated and disciplined army in achieving Qin success, the tomb ironically is witness to the fragility of such states, as part of the Terracotta Army was destroyed in the peasants revolt that marked the end of the short-lived Qin dynasty in 206 BC, presumably deliberately replicating the defeat of the real life armies.

Sima Qian tells us that 700,000 prisoners worked on the building works, of which the tomb was one part.

However, the skilled production of life-sized terracotta figures, each unique in facial and bodily characteristics, representing an attempt to simulate a realistic army, each figure made in separate parts, the human statues weighing 200 kgs, suggest the work of skilled crafts people as well, in huge number, attesting to the reach and economic power of the Qin state. The peripheral position of the army pits, and elaborate finds in other pits around the tomb, also show that the terracotta warriors were far from the most important or impressive elements of the 35-60 km2 complex.

The construction of the army and the cosmology enshrined in the tomb construction and layout, referencing also other key monumental buildings such as the new E-Pang palace, indicate the importance of religious underpinnings of the power of these early imperial rulers. Zheng was drawing on a long standing tradition of religiously sanctioned rule, in which sacrifice, practised for previous millennia in many forms, underwrote royal power and is seen in metaphorical form in this tomb. What is unique about the tomb complex he constructed is its part in the creation a vast coherent built landscape representing his cosmological understanding.

Of course, in addition to the fascinating insights into China’s past, the arrival of the Terracotta Warriors in Liverpool is also an indication of the importance of China’s heritage to its modern day citizens and governing bodies. The Terracotta Army, as displayed in museums, is a major statement of the long pedigree of a unified and powerful state controlling and integrating the Chinese heartlands and remains emblematic in that regard in the country today. Thus, Terracotta Warriors can march across the world as representatives of a distinctive form of cultural diplomacy and capture our imaginations.

Study Archaeology with the University of Liverpool