After thinking about LGBT+ History Month 2018 last month, I thought it would be interesting to take a look how much archaeology can contribute to our understanding of gay history.

Public ownership of heritage means that archaeologists need to communicate its value to all members of society equally. But how do we find evidence of LGBT+ people in the archaeological record? LGBT+ material culture is elusive by nature and difficult for outsiders to scrutinise and recognise because, throughout history, LGBT+ lifestyles have been socially and legally unacceptable.

This drove gay culture underground and its expressions and meanings became coded to prevent exposure, or ‘outing’, of individuals to the dominant heterosexual culture of the time. Not only is LGBT+ culture coded to avoid scrutiny, it is also often transitory – following contemporary fashion or reformulating itself as coded meanings became public. In his photographic study Gay Semiotics Hal Fischer illustrated how wearing a single earring had meaning within the gay community. 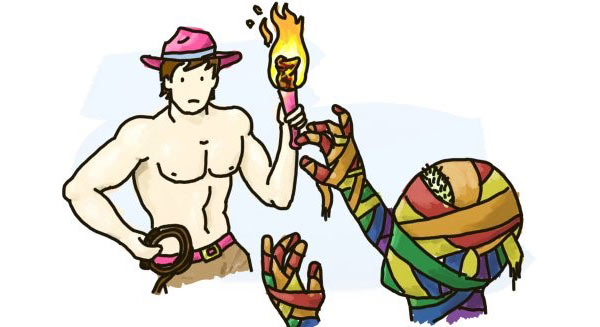 An ostensibly mainstream item of male adornment, once seen as the preserve of pirates, the wearing of a single earring had been ‘negotiated’ to take on a new meaning within the gay community. Once exposed to popular culture by Fischer’s book, discussion centred around which side denoted the wearer was ‘gay’ and which ‘straight’ even though in the gay community the side one wore one’s earring actually denoted whether the wearer was sexually “passive” or “aggressive” (to use Fischer’s terminology).

Mainstream culture therefore recognised that a single earring denoted the wearer’s sexuality, but its true meaning was widely misunderstood. ‘Negotiating’ the meaning of artefacts has been common throughout time. Consider, for example, how safety pins have migrated from baby’s nappies, to punks’ noses, to celebrities’ lapels - changing their means from functionality, to rebellion, to promotion of safe sex and HIV/AIDS awareness.

Similarly, the painted pottery of Athens, intended for bawdy drinking parties, took on a very different meaning when it was laid down in Etruscan burial chambers as a funerary gift. The gay community has similarly ‘negotiated’ the meaning of earrings, handkerchiefs, keys, and other aspects of material culture to give them new meanings.

Although this analogy to Greek pottery does not help us identify any signifier of ancient gay material culture, at least it may go some way towards helping us to understanding the complexity of the task ahead of us.

Study archaeology, classics or Egyptology with the University of Liverpool