‘I made a pact with errancy’: A Review of Charlotte Hodes’s and Deryn Rees-Jones’s Exhibition ‘The Errant Muse’

Long-time collaborators artist Charlotte Hodes and T.S. Eliot Prize-nominated poet Deryn Rees-Jones present ‘The Errant Muse’ – an exhibition five years in the making. ‘The Errant Muse’ explores women writers who have inspired their work, the nature of creativity and the concept of the muse. The exhibition contains various media ranging from poetry and paintings to sculpture and film, interspersed with artefacts from the Victoria Gallery & Museum and the University of Liverpool’s Special Collections. The exhibition engages with the concept of the muse and its many meanings; the muse here is no longer a one-dimensional, static presence who is ‘subsumed to generate male creative practice’. She is a muse for other women, like Hodes and Rees-Jones. She is travelling and transgressing and opens up space beyond male-centred traditions.

Ascending the stairs in the cathedral-like Victoria Building, the eyes are met by a distinctive red wall on which is installed the first part of the exhibition, titled ‘Perpetual Night’. In the paper cut-out images decorating the wall a figure moves, errs, from frame to frame, moving, exploring and escaping the furniture surrounding her; the figure is determined to find her place in this domestic space. Here, Hodes and Rees-Jones give a nod to Virginia Woolf’s A Room of One’s Own (1929). Discussing her own creative process, Woolf writes: ‘On the further bank the willows wept in perpetual lamentation, their hair about their shoulders.’ Here, Woolf uses natural imagery in the same way as Hodes and Rees-Jones, with trees and leaves personified and linked to femininity. In both Woolf’s and Hodes’s and Rees-Jones’s work, there is a link between creativity, specifically from a female perspective, and the errancy found in the unpredictability of nature. 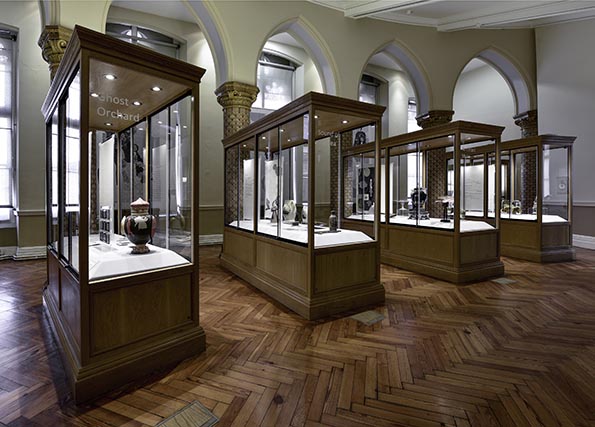 Walking through the doorway on the red wall, the exhibition continues into Gallery One. The first main gallery replaces the informality of ‘Perpetual Night’ with an unexpected formality. Gallery One is titled ‘The Orchard of Lost Things’. The majority of the work is intricately displayed in six glass cases, with each display named and numbered: ‘I – Ghost Orchard’; ‘II – Sound of the Sea’; ‘III – An Errant Muse’; ‘IV Fires’; ‘V – Unfurls’ and ‘VI – Writers’. Hodes’s sculptures throughout the displays depict the familiar figure seen in ‘Perpetual Night’. This female figure, the errant muse, transports herself through every display case, also escaping onto the walls both inside and outside the galleries. Gallery Two is titled ‘Fires’ – a title taken from Rees-Jones’s 2019 lyric essay Fires. This gallery, in the centre of the room, hosts three tablets, each showing a different film. Two are past collaborations of Hodes and Rees-Jones: And you, Helen (2014) and Questions of Travel (2016). One film, however, is new. Fires (2019), an animated short film based on Rees-Jones’s lyric essay, features the poet reading her work while Hodes’s cut-out images move across the screen to illustrate the reading.

As a whole, the exhibition is conceptually surreal. Hodes and Rees-Jones attempt to track the movements of an errant muse like detectives, assembling their clues and artefacts to build an image of this unpredictable being. Traces of female inspiration throughout history grace the galleries, as the errant muse travels through time and space. As Hodes and Rees-Jones write: ‘to err is to travel as much as it is to transgress’. The female figures in the exhibition include women engraved onto bone in scrimshaw artefacts from the University of Liverpool’s Special Collections as well as on enamel, paper and glass in Hodes’s original designs. The errant muse is also embodied in the influential women writers in display VI. In this way, the errant muse inspires and is inspired; she can be the driving force behind creativity and the creative woman, in this case, the woman writer and artist. 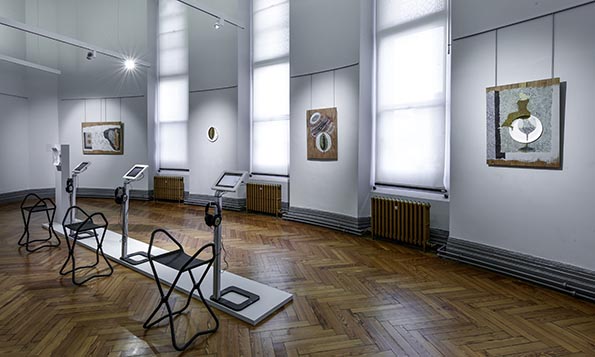 Continuing the exploration of female creativity, the exhibition consistently explores nature and the relationship between nature and the feminine, often using nature to explore the female experience. Nature and natural images are drawn upon in Hodes’s art, Rees-Jones’s poetry and in the objects from the Special Collections. The textures on Hodes’s silhouettes of the errant muse in the displays ‘I Ghost Orchard’ and ‘V Fires’ are vague but are reminiscent of wood, leaves and, in some cases, water. The unpredictability of nature relates to the qualities of the errant muse: she cannot be contained or predicted. The errant muse embodies the creative process in its complexity. Rees-Jones’s poetry in this exhibition explores the proximity of nature and experience from a female perspective. In ‘III An Errant Muse’, Rees-Jones’s poem ‘Passion Flowers’ is accompanied by a single Brendel botanical model, a c.20th-century anatomical flower model used for educational purposes. Here, the flower imagery represents independence but also intimacy. The flower can be seen as an embodiment of the feminine, which inevitably questions itself – what does it mean to be a woman? This ambivalence draws from errancy, which is subtly portrayed in the floral imagery but also the empty vases: the lack of flowers suggests unexpected, erring meaning. 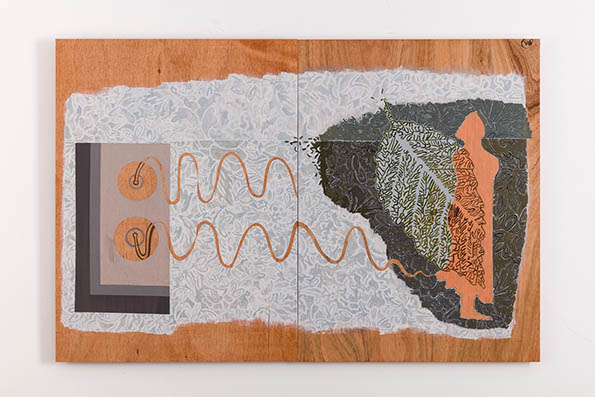 Rees-Jones writes in ‘The Lovers’ in the display ‘II Sound of the Sea’: ‘I made a pact with errancy.’ To err, as in to transgress, is a theme explored through literature in ‘The Errant Muse’. In the final display in Gallery One, ‘VI Writers’, Hodes and Rees-Jones pay homage to women writers who also ‘made a pact with errancy’. With books, manuscripts and photographs, Rees-Jones aligns herself with women writers who came before her. Virginia Woolf, Elizabeth Bishop and Charlotte Hemans travelled and transgressed in their lives, whether it be in terms of politics, sexuality or profession. To Rees-Jones in particular, these women were errant muses.

Hodes and Rees-Jones reference Woolf again in the 2019 short animation Fires, which is displayed in the second gallery. Hodes and Rees-Jones are invested in Woolf’s interpretation of the meaning of poetry in Orlando (1929): ‘a voice answering a voice’. For this exhibition, the first voice is the errant muse, the creative force, and the work of the artist is to answer that voice. Hodes’s artwork is displayed along the walls of the second gallery. These images depict the errant muse overlaid onto images of leaves and familiar natural textures. Whilst the muse is erratic, it does not mean she is not present here. In the early 20th century, when the Victoria Building was part of the university, Gallery One was a women’s reading room and Gallery Two a women’s common room. There are echoes of artistic inspiration here, reverberating from the past to the present.

Read more about the exhibition