In March, students and staff from the University’s humanities access/foundation programme Go Higher, braved heavy snow for a residential weekend at Cavendish Hall in Suffolk. Our trip gave students progressing on to undergraduate degrees in English and History, an opportunity to immerse themselves in their subject areas as we considered the lives of people in the Regency period through its literature and architecture.

The inspiration for our trip was the poetry of George Crabbe (1754-1832), including his poem ‘Procrastination’ in which a woman called Dinah inherits a house from her widowed Aunt, and gradually falls more in love with the house and its contents than with her intended husband. The description of the house forms a key aspect of the poem and, considering this in relation to Cavendish Hall, helped us get an insight into how houses, such as the one that Dinah inherits, were used in the Regency period and how their architecture both served the needs, and shaped the lives, of the people who lived in them.

Cavendish Hall was the perfect place to embark upon this study. Situated in the county of Suffolk where Crabbe was born, it dates from the same period in which he was writing. Today it is managed by the Landmark Trust, a charity which rescues historic buildings at risk and gives them a future by letting them for self-catering stays. Each year Landmark offer a limited number of free places as part of their Landmark Futures scheme. Launched in autumn 2017, Landmark Futures is designed to enable ‘light bulb’ moments across a study field and for individual students. Applications are open to all higher education institutions and similar organisations with only 11 institutions successful in securing a free stay in this first year. 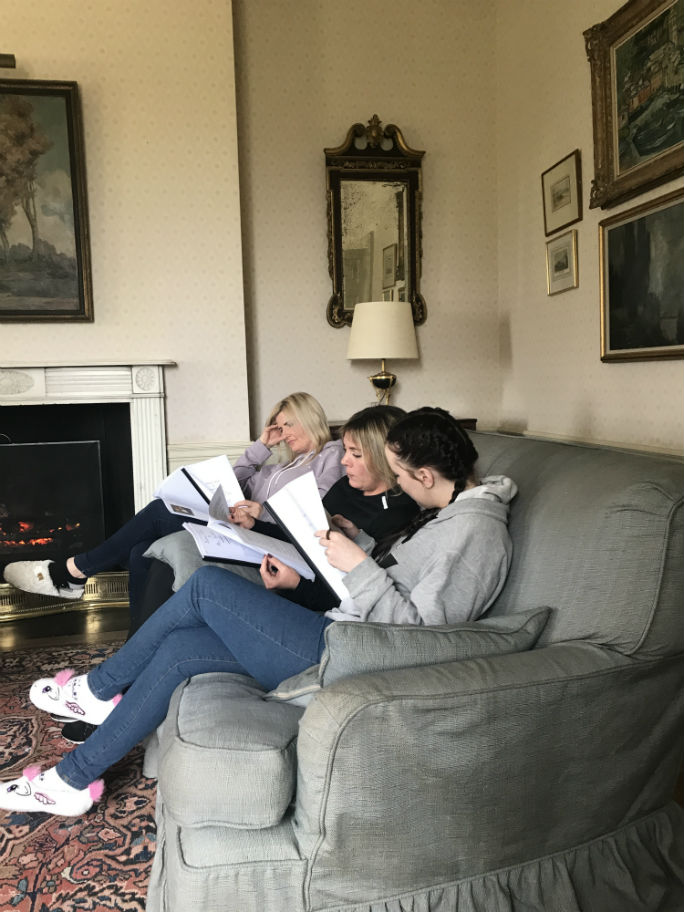 Caroline Stanford, Historian and Head of Engagement at Landmark and who conceived the Landmark Futures scheme said:

“People often tell us they find staying in a Landmark gives them a chance to step away from the distractions of daily life, with time to think, talk, write and be inspired. With the Landmark Futures scheme, we’re extending those benefits, free, to university research groups. The popularity of the scheme underlines the relevance of time spent in historic buildings in beautiful places for those whose work will shape and enrich everyone’s futures, and we’re delighted to be able to help in this way.”

Go Higher’s residency certainly benefited in this way. Together we discussed a central question that the poem raises, which is what it would have meant for a woman to own property at the time it was written – clearly far more was at stake to Dinah than the ‘curious trifles’ of her room. Mark, one of our students, reflected that it was striking “how history can be perceived very differently depending on whose viewpoint you look at”. Cavendish Hall brought this into clear focus for him: “I found it so interesting to discover the layout of the house and how different the house would have flowed if you were a servant in the household.” 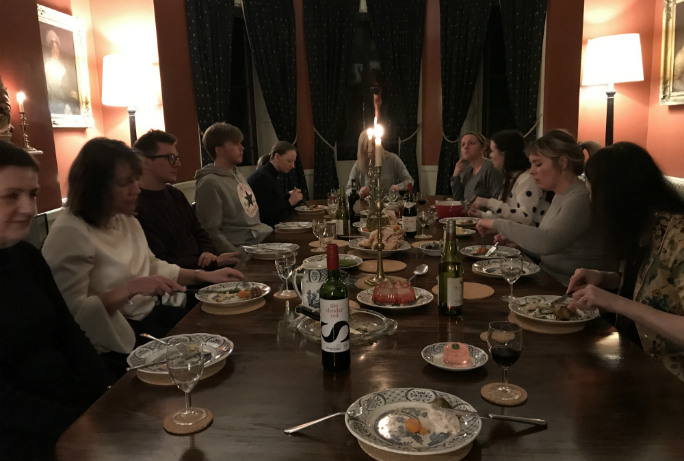 One of the most revealing aspects of the stay was the act of reading literature together. In University teaching, what we often see are the ‘end products’ of students’ thinking – the ideas that are developed in essays or have been constructed in preparing for a tutorial. At Cavendish Hall it was energising to see our opinions form over the days we spent there. Families or groups of friends reading together was a common activity in the Regency period, and we see such scenes depicted in Crabbe’s own poetry. As we read ‘Procrastination’ together, it was noticeable how sympathies shifted – first towards Rupert, Dinah’s rejected lover, then to Dinah herself. Having a group of people together, discovering a text for the first time, helped to understand the way in which Crabbe’s writing avoids simplistic moral judgements.

The trip was not all hard study however. Part of what we wanted to understand was how people in houses like this entertained themselves and so we recreated a dinner based on a Regency menu with dishes of Flummery and Torta of Herbs, learned to play the card game Speculation, and the students staged a stunning performance of Elizabeth Inchbald’s play Lovers’ Vows – a popular drama of the age, which is rehearsed by the characters in Jane Austen’s Mansfield Park. It was so good that we are hoping that the students might restage their performance of the play at a later date. Watch this space.