The charity Hope for Justice, which works in the UK and globally to tackle modern slavery, commissioned the University of Liverpool to conduct an independent evaluation of its advocacy programme in the UK.

Hope for Justice has developed and modelled the role of Independent Modern Slavery Advocates (IMSAs) in the anti-trafficking sector for the past six years. IMSAs sit outside of government provision and provide a single point of contact for survivors as they navigate complex systems and multiple barriers to support.

Alexandra Williams-Woods, a PhD researcher at the University, completed the evaluation of the IMSA model in October 2020. The aims of the independent review were to evaluate the practices and processes of the IMSA model and to assess the potential for wider rollout of the model and the formalisation of the role, similar to that of Independent Domestic Violence Advocates. 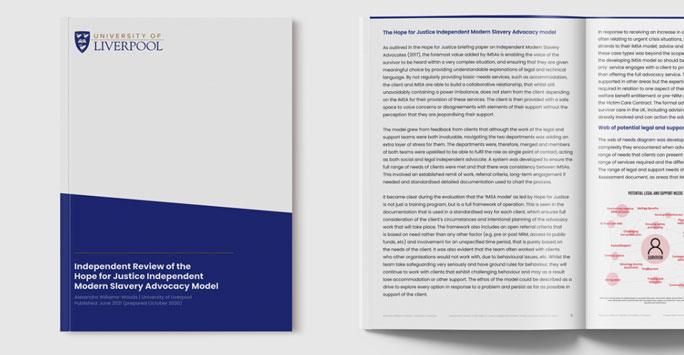 The findings of the report demonstrate that Hope for Justice’s IMSA model significantly improves outcomes for its clients and provides a tested model for responding to the substantial needs and structural disadvantages encountered by survivors of modern slavery. The research attributes much of this success to three main themes: the empowering client/advocate relationship, the broad yet expert knowledge of IMSAs and the independence of the model.

Alongside the publication of the independent evaluation in June 2021, Hope for Justice has announced a new partnership with British Red Cross and the Snowdrop Project to develop a framework for the accreditation of IMSAs in the UK. The joint announcement from the three organisations explains that the recommendations and key findings of the independent evaluation “were key drivers behind the new partnership.”

Among those in support of the collaboration are Dame Sara Thornton DBE QPM, the Independent Anti-Slavery Commissioner and Honorary Professor in Modern Slavery at the University, who said: “As the independent Anti-Slavery Commissioner, a key part of my role is about encouraging good practice. I am pleased to see that following an independent evaluation this new partnership seeks to build on the model for independent advocates created by Hope for Justice, and develop a framework for the accreditation of the role so that it can be introduced more widely across the UK whilst promoting consistent standards in care.”

Alexandra Williams-Woods said: “The role of an advocate can be challenging, empowering the client to make their own choices by helping them navigate often complex systems. This is especially true when advocating for survivors of modern slavery and human trafficking. By testing the Hope for Justice IMSA model against the foundational principles of advocacy, in the context of sectoral best practice for working with survivors, I am pleased to commend the model as a vital tool in the holistic response to survivor needs.”