My research focusses on the effects of climatic variability on the evolution and dispersal of our species, Homo sapiens.

Working with a team of colleagues from the UK, Ethiopia, Germany, and the USA, I investigate links between changes in behaviour and changes in prehistoric climate over the past 350,000 years. Changes in behaviour can be seen through differences in the composition of the stone toolkits that our ancestors used, the environments they inhabited, and the animals and plants that they processed and consumed.

Changes in climate are reconstructed via deep coring of lake sediments that reveal indicators of fluctuating levels of precipitation through time. Our ongoing work on cores from Lake Chew Bahir, southwestern Ethiopia, provides the most complete, continuous record yet available of climatic changes in eastern Africa over the past half a million years. 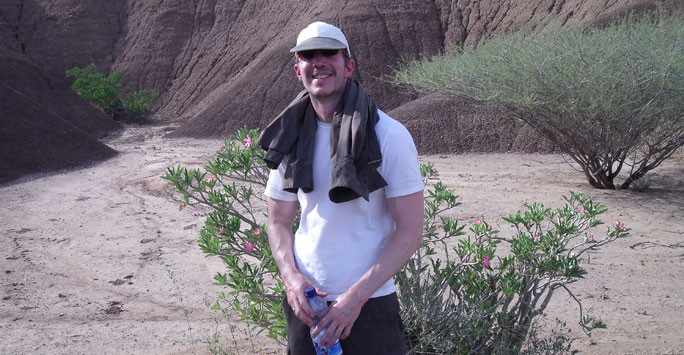 Matt at the Omo Kibish locality, Ethiopia, where some of the earliest fossils of our species were found.

Homo sapiens is a long-lived, slowly reproducing species, and over the course of our evolution we have placed increasing emphasis on dealing with climatic challenges via behavioural and cultural means. As our rates of reproduction slowed, our brains increased in size, facilitating a series of more flexible behavioural strategies that enabled us to deal with often drastic changes in environmental conditions during glacial-interglacial cycles. This versatility – which arose initially to enable us to deal with climatic fluctuations within Africa – was what ultimately enabled us to disperse from our homeland and to populate the rest of the planet.

A recent analysis of the variation in stone toolkits used by our ancestors over the past 350,000 years can be found here.

An analysis of the dispersal of our species in relation to fluctuations in climate in eastern Africa can be found here.

The issue of our slow reproductive rates and our increasing reliance on behavioural and cultural means to deal with climatic variability is discussed here.