Posted on: 1 September 2022 by Jordana Blejmar and Erika Teichert in 2022 Posts

Jordana Blejmar and Erika Teichert share exciting news from Argentina about the opening of an exhibition as part of their AHRC-funded project 'Cold War Toys: Material Cultures of Childhood in Argentina'. 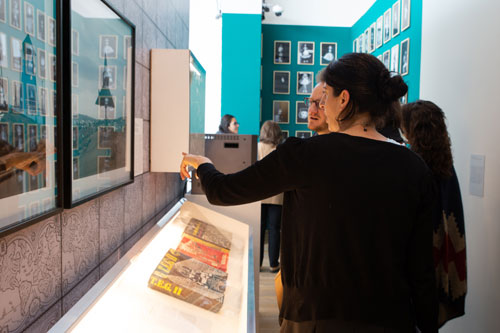 Escala 1:43 opens a dialogue between our political history and a selection of toys produced or commercialized in Argentina over the last century. The exhibition also invites us to explore the inclusion of these objects in contemporary artistic artefacts. Can toys embody history? What can their materialities, which are manufactured, advertised, and entangled in games, say to us?

Toys – those things we interact with from a very young age – comprise a non-linear journey that reveals vital areas of material culture. Far from offering a nostalgic or melancholic perspective on the lost world of childhood, toys are shown to be both playful objects and fundamental parts of cultural heritage: historical documents, temporal icons, devices for constructing fictions.

“If we survey the entire history of toys,” wrote Walter Benjamin, “it becomes evident that the question of size has far greater importance than might have been supposed.” Giorgio Agamben also noted that toys, dating back to the spheres of the sacred and the practical-economic, invite us to rethink our relationship with time through the process of miniaturization of everyday objects.

The exhibition, therefore, is organized around the idea of scale, taking its title from the proportions of one of the pieces on display: a miniature Ford Falcon produced by the manufacturer Buby, which was popular in the 1970s. These scale model cars were sold in Argentine toy stores at the same time as the Falcon car itself was not only being advertised by Ford with the slogan “keeping the country on the move” but was also becoming a symbol of a brutal military dictatorship. 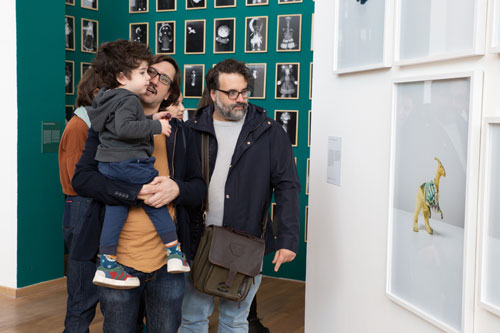 The exhibition opens with a section of building blocks and games from the 1940s and 1950s. This area traces a dialogue between the pedagogical theories of the 19th century, the avant-garde movements of the early 20th century, and the toys distributed during the Peronist era. The tour continues with a space dedicated to political violence, including pieces associated with events that occurred during the 1976-1983 military dictatorship: the celebrations of the 100th anniversary of the so-called “Conquest of the Desert”, toys connected to the Malvinas conflict, and the war turned into a board game.

The following section highlights how certain toys encapsulate two different worlds to depict the sexual division of labor: future male workers and future housewives. Other works display scenarios inhabited by gloomy spirits: babies, dolls, and scale figures evoke the traumatic and the sinister through specters, doubles, and missing persons. Some final images recall the atmosphere of the 1990s and beyond: a peculiar end-of-party mood, a sense of the destructive force of neoliberal policies of consumption and exclusion, and the idea of art as a sheltered space for collective encounters.

By bringing together heterogeneous objects and artifacts, Escala 1:43 invites us to pay attention to the trajectories of Argentine toys, to the agency of their materiality and their recurrence in contemporary visual productions. As Bruno Latour suggests, things produce things, and have concrete effects on the world. 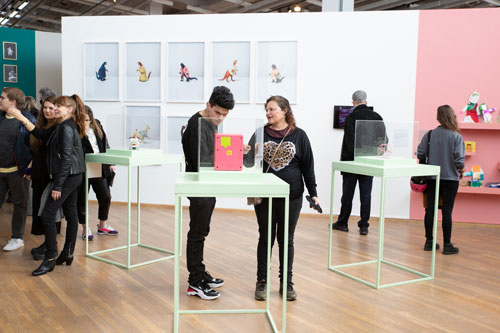 The inauguration was attended by many members of the public. Other attendees included Nora Hochbaum (the General Director of the Parque de la Memoria), Florencia Battiti (Chief Curator) and her team, Pamela Malewicz (Sub-secretary of Human Rights of the City of Buenos Aires), and Vera Jarach (Mother of Plaza de Mayo and member of the Assessor Team at the Parque).

During the event, we also welcomed the artists whose works form part of the exhibition, toy collectors, and staff members from archives and museums who helped with the collection of the toys on display. 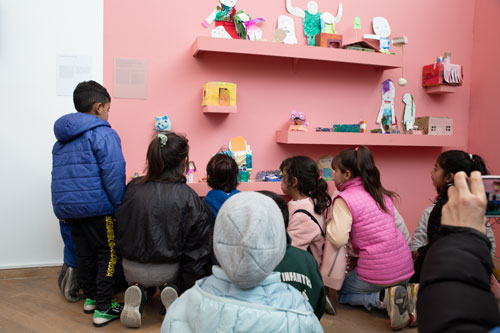 A highlight was the visit of the children from Villa Fiorito and Villa Jardín, who had created toys especially commissioned for this exhibition as part of the workshop organized by the art collective Belleza y Felicidad. The children had the opportunity to see their creations displayed alongside renown Latin American artists like León Ferrari and Feliciano Centurión. On Friday 5 August 2022, prior to the inauguration, we also hosted a private tour for journalists. We are delighted that the exhibition has been reviewed by most major newspapers in Argentina.

To read the reviews and listen to radio interviews with us about the exhibition please visit the project’s website. You can also download the poster made for the exhibition here.

We would like to take this opportunity to thank everyone who made this exhibition possible: the AHRC, the project’s mentor and advisory board, the finance team and research staff at the School of the Arts in Liverpool, the staff at Parque de la Memoria, the technicians who helped us build and prepare the exhibition space, the artists who lent us their work, as well as the toy collectors who helped us gather the objects. We are very proud of the way the exhibition turned out and it wouldn’t have been possible without their support.

Thank you for reading and stay tuned for further updates!