The programme presents an exciting blend of Beckett’s work, including multiple performances of some of his most rarely performed plays – Ohio Impromptu, Catastrophe, and Krapp’s Last Tape, alongside a musical series featuring Words and Music, his radio play collaboration with Morton Feldman, and a Ghost Trio concert with Fidelio Trio performing Beethoven and Schubert, two of his favourite composers.

Central to the programme is a keynote by James Little introduced by Frank Shovlin, and a roundtable “Samuel Beckett’s Politics of Confinement” with William Davies, Emilie Morin and Hannah Simpson.

Book your tickets for the keynote event here.

Beckett Confined will present his works in some of Liverpool’s most interesting and non-traditional performance spaces, bringing them alive in new and unconventional ways.

Catastrophe is a short play by Samuel Beckett, written in French in 1982 at the invitation of A.I.D.A. (Association Internationale de Défense des Artistes) and first produced in the Avignon Festival (21 July 1982) … Beckett considered it ‘massacred. It is one of his few plays to deal with a political theme and, arguably, holds the title of Beckett's most optimistic work. It was dedicated to then imprisoned Czech reformer and playwright, Václav Havel. In the one act play Beckett uses the world of theatre and its hierarchies as a metaphor of power, of the violence of totalitarianism and of the fight against them. 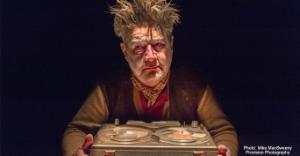 Krapp’s Last Tape is a one-act play, written in English in 1958, by Samuel Beckett. The play consists of a cast of one man and a tape recorder. The plot takes place on Krapp’s sixty-ninth birthday and, as has become his custom, he hauls out his old tape recorder to review one of the earlier years – in this case the recording he made when he was thirty-nine and makes a new recording commenting on the events of the previous twelve months. Through the recordings Krapp reviews his own past, and slowly the audience understands that he has nothing left but his past as his voice on tape.

Ohio Impromptu is a "playlet” by Samuel Beckett written in 1980, Beckett’s colleague, the scholar, S.E. Gontarski, requested that Beckett produce an intense piece to be performed at an academic symposium in Columbus, Ohio in honour of the playwrights seventy-fifth birthday. The play operates around a Doppelgänger seen as mirror images and is representative of Beckett’s ghost period, and the symbolism of apparitions that reverberate the haunting nature of memory and nostalgia.

In 1961 Samuel Beckett wrote Words and Music for BBC radio, a play featuring the two characters “Words” and “Music” (also referred to as Joe and Bob). The work was withdrawn following the première due to Beckett’s dissatisfaction. 20 years later, Beckett suggested that Morton Feldman should compose the music, resulting in the first complete performance in 1987 (the year of Feldman’s death), produced for the American Beckett Festival of Radio Plays. In Feldman’s words: ‘It was a huge amount of fun to do something for Beckett, a sort of tribute to him, i.e. someone who has been part of my life since the ‘50’s … it was to some extent a labour of love, which I happily undertook.’ 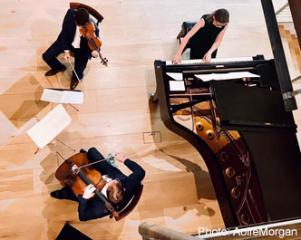 11am Catastrophe – Toxteth Reservoir SOLD OUT

Please join University of Notre Dame graduate students as they host public discussion groups intended to reflect and expand upon the performances at the Beckett in Confinement Festival.

These PhD students from the English department at Notre Dame have been engaged in a yearlong discussion group on Beckett's works and are happy to open this group up to any and all who might have an interest in Beckett's plays. Discussion will be informal but invigorating.