Visions of the Future

Visions of the Future was a Tate Exchange project run by Will Slocombe and members of the postgraduate research community from English, alongside Special Collections and Archives. The aim of the project was to engage the members of the public with materials from the University’s Special Collections and Archives, and encourage them to consider what the future will look like, based upon some of the materials from the Olaf Stapledon papers and from his seminal work, Last and First Men (1930).

Stapledon’s papers are in many respects a significant legacy of the University’s own history; Stapledon was not only a very influential writer of “future histories” and sf, but also a former member of the Philosophy department. His fictional works explored how humanity might develop into the far future, and how we might change as a species, and using this as a starting point, the audience was asked to consider their own relationship to Stapledon’s ideas about the future, now over eighty-five years old, but also to consider what they think the future might hold, using notes and by drawing their own posters of the future, and beginning a conversation on the walls of the Exchange space itself 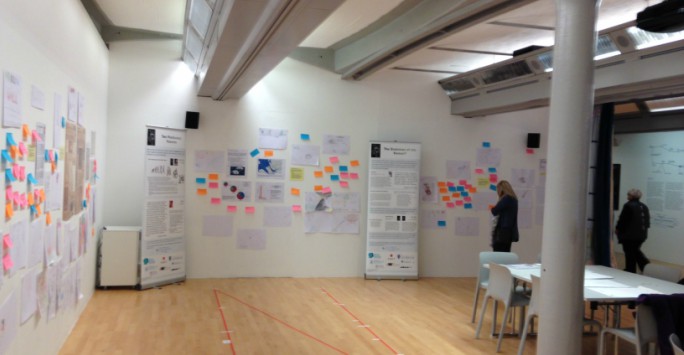 Visions of the Future at Tate Liverpool

These materials will themselves hopefully be the subject of some interest in the future. Building upon the ideas explored by the project, the team will be sealing the submissions, posters, and ideas in a time capsule, alongside other items indicative of the year 2017. This capsule will be opened initially in 2030, the centenary of the publication of Last and First Men and then, after reflecting upon today’s visions of the future and adding more materials, re-sealed again until 2130.