Say hello to Ardern Hulme-Beaman, our latest Researcher in Focus. Ardern is based in Archaeology, Classics and Egyptology and his research focuses on exploring adaptations of animals to anthropogenic environments.

Ardern is an early career researcher exploring adaptations of animals to anthropogenic environments (environments created and heavily influenced by humans). By examining animal-human relationships from a range of different angles — genetics, morphology and ecology — he has amassed a broad range of skills, which make him particularly suited to working in the hybrid field of archaeology.

To add to this, Ardern is a co-founder of both PalaeoPi, a spinout company specialised in virtual 3D model building, and Hexad Brewing, a specialist brewing company that makes custom and bespoke beer to order for events and occasions. An enthusiastic brewer, he has even done a number of experimental archaeological beers: a modernised Sumerian beer for an archaeological conference and also an (attempt at!) authentic Ancient Egyptian beer for a Channel 4 documentary. Here at the University of Liverpool, the Department of Archaeology, Classics and Egyptology (ACE) exemplifies the diversity of archaeological research, with experts in ancient languages, ancient materials, ancient civilisations, ancient diets, palaeoenvironments, human evolution and of course zooarchaeology — the study of animals in the past — making ACE a perfect fit for all of Ardern’s research and interests.

Ardern joined ACE two years ago with a Leverhulme Trust Early Career Fellowship to explore the role of canids in human societies through the lens of the biomechanics of their mandibles. This stems from his previous work on a large dog domestication project, which attempted to identify when, where, and how many times dogs were domesticated. This became a much more complex set of questions than initially expected as he found that there was very little difference in canid dental and mandibular shape among populations and the shape is almost entirely functional, so any evidence for human influence is very complex.

As a result, Ardern ventured out to address the questions of dog domestication (and adaptation to human environments) from other angles. Although the primary focus of his fellowship is to examine the biomechanical properties of the bite of canids, Ardern has also been exploring the likely consequences of and adaptations to changes in reproductive behaviour of canids and other human-associated animals. This has led to a collaboration with Prof. Paula Stockley in the Institute of Integrative Biology exploring ideas related to the possible influence of post-copulatory competition on domestication. 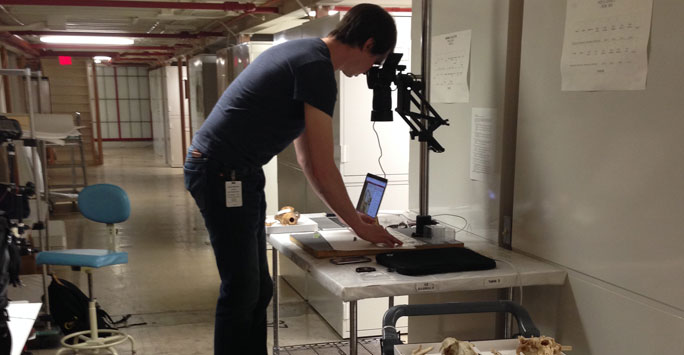 Ardern working with wolf skulls in a museum.

Shape analyses feature heavily in Ardern’s research, so he has developed a number of skills in the 3D reconstruction of virtual objects from photographs. This method uses multiple photographs taken from different angles and calculates the object geometry from this. Photogrammetry, as the method is known, plays an increasingly central role in heritage studies and archaeology as it provides an invaluable tool for archiving, analysing and disseminating objects of cultural importance. It is now used extensively in the documentation of archaeological excavations to record each stage of the site work.

Although Ardern’s primary role in the department is research, a component of a Leverhulme Trust fellowship can include some teaching, so imparting and developing photogrammetry skills across the department fits well with this aspect of his position. As a result, Ardern, along with one of the Histories, Languages and Cultures senior technicians, JR Peterson, started running semi-regular departmental meet-ups and ACE student training sessions. These proved to be extremely popular, but students were not using what they had learned in their own research after the sessions. Ardern’s approach to teaching is very much research-driven, so to increase the uptake of photogrammetry across the department, Ardern started the student photogrammetry team, which he now coordinates and leads and has proven to be one of his most rewarding and stimulating creative outputs.

The student photogrammetry team has quickly proven to be a great success; completely open to all, its primary function is to train students to an extremely high degree (often higher than most staff!) and seed photogrammetry expertise across all archaeological disciplines in the University of Liverpool. In this way the student team can transfer their skills and experience in this highly complex method to others, while researching and honing the method. The team has recently been awarded an Alumni and Friends Fund grant to cement and bolster its wide-ranging activities, which include: archiving of archaeological material, development of novel techniques, refining existing techniques, coding and automating photogrammetry procedures, public engagement, social media statistics and even primary research. In many cases this directly results in student led and driven research. The team is now working towards future museum exhibitions that integrate different aspects of the ACE department’s research with virtual 3D objects in augmented reality. With an augmented exhibition in the works for December 2020, Ardern hopes to incorporate some of his own research to share his results more widely, so watch this space!

Find out more about Ardern and get in touch with him via his staff page.