This project has grown from research carried out by Professor Lisa Shaw on popular cinema in Brazil in the 1940s and 1950s, and research for her book Carmen Miranda (BFI/palgrave Macmillan, 2013).

Lisa discovered that elderly fans from all over the world still use Miranda's films and music as a way of enhancing their emotional wellbeing. Their testimonies revealed the ability of musical film to stimulate positive emotions, particularly among older people.

Having visited several nursing homes in Merseyside and Cheshire, not least when her father required residential care, Lisa was struck by how television and DVD collections were being under-utilised to stimulate residents cognitively and emotionally.

There was clearly a need for a much more interactive experience of film viewing and a creative, dynamic engagement with audio-visual material that would improve the participants' sense of wellbeing. 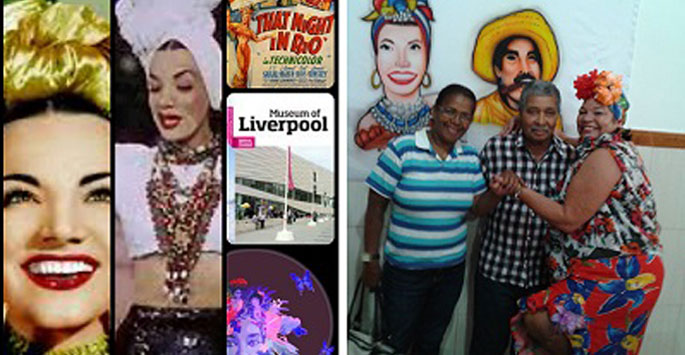 Working with the activites coordinator at Rowan Garth BUPA nursing home in Liverpool, Lisa devised a film-related activity tailored to the backgrounds and interests of the residents. She created two CDs of short film clips, one focusing on musical films of Brazilian Hollywood star, Carmen Miranda, the other on films shot in Liverpool during the 1960s, and piloted these with two groups of residents, one of which was composed of people with an early-stage dementia-related cognitive impairment.

These were subsequently tested with groups of elderly users of Companymatters4u's day centres in Liverpool (2017-2018), to incorporate feedback from the users and the care providers. This project was funded by a small grant from the HOP (Happy Older People) network.

Having spoken to friends who work as carers, community health workers and GPs in Brazil, Lisa also became increasingly aware of the lack of tools and training that they have at their disposal to carry out arts-based wellbeing activities.

Working with the GP and a team of six community health workers at the Fazenda Inglesa Health Centre in Petrópolis, Brazil, she staged a pilot project in the form of film club events open to patients of the centre aged over 65 (2015-2016). She combined the CD of the short clips from Carmen Miranda films used at Rowan Garth with another she created from excerpts of Brazilian musical comedies ('chanchadas') from the 1950s.

The results of these projects led to the development of best-practice toolkits (in English and in Portuguese) to enable activities coordinators, carers and health professionals to optimize the benefits of using films to stimulate memories and reminiscence, and an improved sense of wellbeing, among the elderly. The research findings have been published in the book Movies, Music and Memory: Tools for Wellbeing in Later Life (Shaw and Hallam eds, Emerald, 2020).

The project was presented to Petrópolis City Council which led to the toolkit being used during a 4-week-film-club project at the Lar São João de Deus nursing home in Itaipava, Petrópolis, Brazil. In December 2019 Shaw ran a toolkit training workshop at the Museum of Image and Sound in Campinas, Brazil (2019) for carers, and since the Covid-19 lockdown in the UK in March 2020 she has created a ‘Cinema, Memory and Wellbeing’ Facebook page that allows older people to engage with weekly film clips and discussion groups. This model has now also been adopted in Brazil via a collaboration with the Museum of Image and Sound in Campinas.

The CMW toolkit is now being used in NHS dementia wards in Northwest England, as well as nursing homes and day centres in the UK and Brazil.

Read the guest blog post on the project by Lisa Shaw and Brazilian GP Dr Leonardo Anesio on the Medical Humanities blog.

The impact of this project has been recognised by Shaw’s shortlisting for an AHRC/Wellcome Medical Humanities award in the Best International Research category in September 2020.

Memory and wellbeing workshop at the Plaza Cinema Crosby

Watch this short video to see a taster of a memory and wellbeing workshop held at the Plaza Cinema, Crosby in October 2019.

We are always looking for ways to help our residents maintain community connections and feel part of the wider city around them - which this project did.