Why are early modern French female writers so fascinating?

"As I sat in the library recently during my research leave, watching the last of the daylight fade away, I found myself thinking once again about the writer who has occupied my thoughts more than any other during the last ten years; Hélisenne de Crenne.

Hélisenne de Crenne is an exceptional figure in the landscape of sixteenth-century French writing because she was the only living woman writer to have her works printed in Paris before 1550. She was probably the first French woman ‘professional’ author, not in the sense that she was necessarily paid for her work but in that she sought to create a reputation for herself based on the perfection of her writerly craft and her scholarly rigour. Her first three works which appeared in 1538, 1539 and 1541 are all set in the same fictional universe. 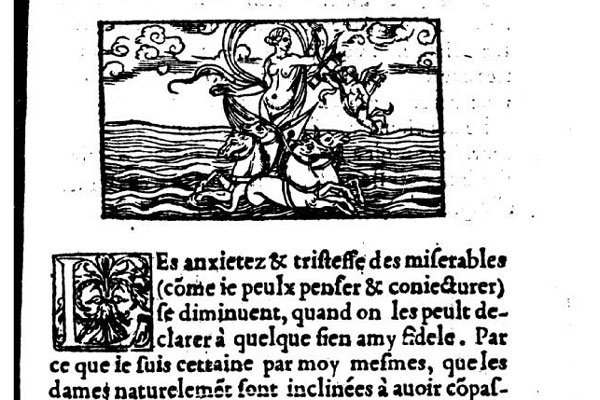 The first of these, the Torments of Love (Angoysses douloureuses qui procedent d’amours) is an autobiographical fiction whose heroine Helisenne not only has an adulterous love affair but also writes the book of her story and (through the intervention of Mercury, Pallas, Venus and Jupiter) has the book printed in the city of Paris. This achieved immediate success, becoming a bestseller in sixteenth-century France.

Her second work is a collection of personal and invective letters modelled on a work by Erasmus, which includes a variety of correspondence to friends and acquaintances as well as invective letters to recipients with which she had a bone to pick. Foremost amongst these is her fictional husband against whom she defends the female sex: an important contribution to pro-feminist debates by a female author of the period.

The third The Dream, is a didactic dialogue that appeared to the writer in the form of a dream. Lastly, Crenne translated the first four books of Virgil’s Aeneid, the story of Dido and Æneas that was as well known in the early sixteenth century as it is today. In some respects the pinnacle of her career in print, this work was printed in large format folio and dedicated to the King of France, Francis 1st (reigned 1515-1545). 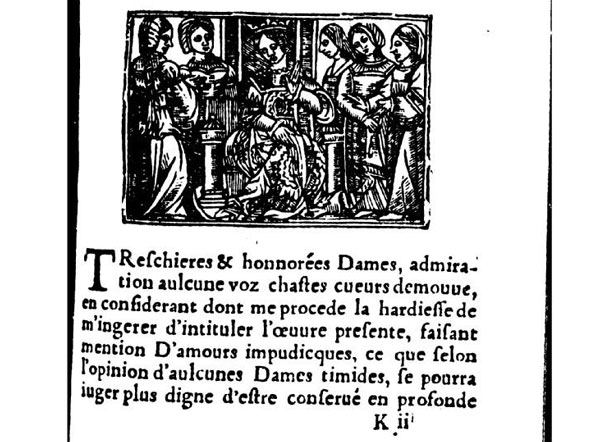 There is so much that we do not know about Hélisenne de Crenne that these gaps in our knowledge are themselves deeply enigmatic. We don’t know, for example, when or where she was born or when or where she died. We don’t know how she came to be so educated or how she, as a provincial woman from outside the court and nobility, came into contact with Denis Janot, the printer of her books.

However, there is so much that we can glean about her views, particularly those on gender politics, from her works.

We know from her dedication to the Aeneid that she was an erudite scholar of Latin literature and was well-versed in the textual variants of Virgil’s source text that circulated in early sixteenth-century France. We know that she saw the education of both male and female readers as a central reason for her writing, especially in her second work in which she proposes letters that her readers can use as models in their own compositions. We know that she sought to express a female-authored point of view in genres that for so many centuries had written about women but not from their own perspective.

Early modern French women writers are a compelling bunch. They connect us with writing from another time and place that reconfigures expectations about gender roles, power structures, access to learning and agency. Through the obstacles female authors overcame in the composition and circulation of their works, they challenge our own assumptions about how we view women, what holds them back and what will empower them to succeed."