Colette - a writer for our times?

Academic, Pollie Bromilow, reviews Wash Westmoreland’s latest film, 'Colette', and explores what it means for our understanding of this key French author.

Colette is the best-selling French female author in history and yet, interest in her works has faded over the last few decades. According to a major academic database, only a handful of items on the author have been published in the last ten years, compared to over eighty for Proust, and the most recent edition of any Colette novel in the Livre de poche  series dates from 2004. Given this neglect, Wash Westmoreland’s new biopic Colette is a welcome means of bringing the life and works of the author to a new audience.

At the centre of the film is entrancing Kiera Knightley’s performance as the central character, a defining moment of her career which is likely to be recognised in this year’s Oscars. Colette is a country girl who is taken to Paris by her cultural entrepreneur husband Henri Gauthier-Villars, known as ‘Willy’. Finding himself unable to pay the writers who are producing the reviews, letters and novels which are published in his name, he publishes instead a novel written by his wife which enjoys instant and widespread success.

The film depicts the couple’s adventures on the rollercoaster of success during their marriage from which eventually ended in divorce. This included the publication of the four ‘Claudine novels’ that all appeared under Willy’s name and the adaptation of the first novel into a stage play, including the casting of Algerian-born actress Polaire in the title role.  Colette’s emerging desire to seek creative and financial control of her own writing and to escape the marriage made unhappy by the womanizing Willy is realised through her long-term relationship with cross-dressing Missy, the Marquise de Belbeuf. The films ends with Colette’s bisexuality and cross-dressing constructed as the liberating force behind her future career as a prolific, recognised and successful author in her own right. 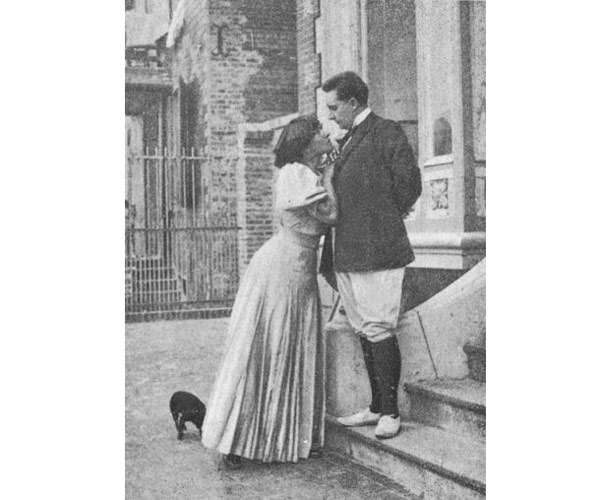 Knightley convinces as a young woman whose patience is so tested by her husband’s chauvinistic abuse of their marriage that she becomes resolute in her bid for autonomy. She brings authenticity to the sensuality of Colette’s unconventional marriage and lesbian relationships. Through Knightley we understand Colette’s love of nature, but also the wit which would bring her enduring fame. Above all, we grasp the audacity of her challenge to the patriarchal values that underpin our daily existence through marriage, clothing, and the sexual and gendered identities which shape our realities. We see her evade the constraints of the men who would have controlled her: her husband, her publisher, the male audiences appalled by the lesbian kiss in the music hall.

We leave inspired by Colette’s carefree iconoclasm and determination to create an alternative way of being.

The film submerges us in the atmosphere of fin-de-siècle France, captured so effectively by Giles Nuttgens’s beautiful cinematography. It avoids visual clich its attention to detail in recreating the historical reality of the period. A large amount of archival research has informed the costume design, for example, through the use of photographs and contemporary paintings to recreate outfits. In addition, costume designer Andrea Flesch revealed in an interview with Variety magazine that many pieces were original to the period and had to be restored using contemporary techniques.  The reproduction of the author’s handwriting in the representations of her novel manuscripts also envelop the viewer in a sense of Frenchness which extends beyond the cultural caricature.

Yet, for all of this fidelity to the recreation of the past the subject of the film, this trajectory of creative discovery through which gender and sexual identities are problematised, seems to transpose directly into the present. Colette shows us that our literary heritage can be diverse if we choose to see it that way.