France and football since 1998

France’s World Cup victory in 1998 was seen not only as a sporting triumph, but as a political, social and cultural one as well. In one of the lectures I give on the French Fifth Republic, as part of our first-year Introduction to French Studies module, I always include some discussion of France’s World Cup win. It’s always at this point in the lecture when I start to feel old, realising that our students are either too young to remember the World Cup of 1998, or weren’t even born!

‌Nonetheless, France’s triumph is an important reference point in understanding how the football team was put forward as a representation of the success of the French model of integration. The French republican model is based on unity by uniformity and refuses staunchly to recognise ethnic difference.

The 1998 squad, united in its goal of World Cup success, was christened La France Black-Blanc-Beur, reflecting its ethnic composition. The term ‘Beur’ is an example of French verlan (backslang) and means ‘Arabe’ (Arab). The team was made up of players of Antillean (Lilian Thuram) and sub-Saharan African origin (Marcel Desailly), metropolitan French origin (Didier Deschamps, Laurent Blanc), and North African origin (Zinedine Zidane). The midfielder Christian Karembeu was born in the French Pacific Overseas Territory of New Caledonia. He moved to metropolitan France at the age of 17.

This was an ethnically diverse team, a team that provided a timely reminder of France’s imperial legacy at a time when the country was only just beginning to confront its colonial past. For example, the Algerian War of Independence (1954–62), which signalled the definitive end of the French Empire, was only recognised as a war by the French state in 1999.

In reality, the football team’s success only papered over the cracks. The leader of the French Far Right party, Jean-Marie Le Pen, called the 1998 team ‘artificial’ and claimed that ‘foreigners’ had been made part of the French team. Le Pen’s comments demonstrated that, despite the celebration of the ‘Black-Blanc-Beur’ team, legitimate French citizens were still not considered as ‘truly’ French by certain members of the French population.

Only three years following the World Cup triumph, a ‘friendly’ match between France and Algeria had to be abandoned after a pitch invasion. The Marseillaise had already been whistled by the crowd and the French players were booed. Only one French player was cheered: Zidane. Those who jeered and whistled at the French players and caused the match to be abandoned were French citizens, of North African origin, angry at their lack of access to employment and better housing, frustrated by their marginalization from dominant notions of ‘Frenchness’. 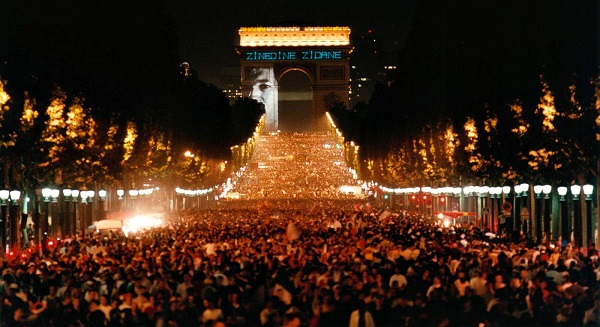 The captain of the 1998 World-Cup winning team, Didier Deschamps, leads France into Russia 2018. French football has had its rocky moments since Deschamps lifted the World Cup trophy, having been embroiled in clashes between players and coaches (for example at the 2010 World Cup), racial tension and sex scandals. The team appears more united this year and has an abundance of talent. I for one am hoping that the spirit of ’98 can be channelled into another French triumph.

As for Zidane, the hero of the 1998 triumph, his final act as manager of Real Madrid was to defeat my team, Liverpool, in the Champions League final. It’ll take time, but I might forgive him one day...