A ghostly and shadowy world - why we love Nosferatu

There's no doubt that vampires continue to be a fascination in the world of film. (Remember that tiny movie called 'Twilight'?) But this Halloween we are thinking back to where it all started: F. W. Murnau’s 'Nosferatu' from 1922.

We asked Dr Andrew Plowman to tell us more about this iconic German film, that you can study as part of our Film Studies BA degree course:

"F. W. Murnau’s 'Nosferatu' (1922) was a controversial and a ground-breaking film in its day. It was based on Bram Stoker’s novel Dracula (1897) and we are lucky to have it. Murnau and his screenwriter Henrik Galeen did not have permission to adapt Dracula and they tried to get around this by changing characters’ names and transposing parts of the action to Germany, but when Stoker’s widow found out she sued for copyright infringement and copies were ordered destroyed. The film used a variety of different effects to evoke the supernatural. Murnau and Fritz Arno Wagner, his camera man, combined double-exposure techniques associated with spiritualist photographers in the nineteenth century with modern filming and editing techniques to recreate on the screen the ghostly and shadowy world of Count Orlok, the vampire. But for me, it is the way the narrative cuts and makes connections between Orlok, Thomas Hutter (the Jonathan Harker figure) and Ellen (Mina Harker) that still makes Murnau’s telling of the story so powerful. 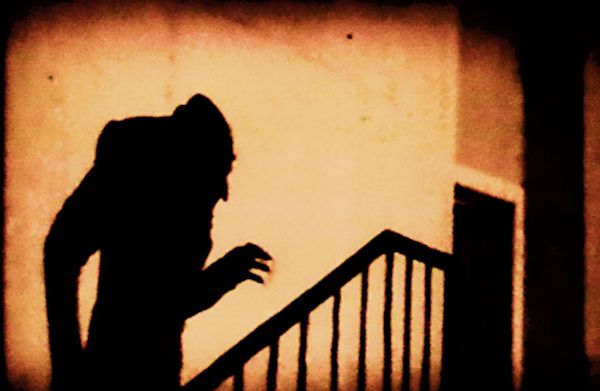 It really is one my favourite films. I love the brooding shots of the mountain landscape when Hutter travels eastwards towards Count Orlok’s castle near the start; they seem to linger just a little bit longer than is needed to tell the story and the effect hauntingly beautiful. It is difficult to put ourselves in the place of the film’s original audiences, but I think the final sequences must have been absolutely terrifying – they are still frightening now! This is when the film cuts between Ellen, spellbound in her room, and Count Orlok as he approaches her and we see the iconic image of the vampire’s shadow moving along the wall.

I chose to use the film for the second-year Film Studies module on ‘German Cinema from Expressionism to the Present’ because it is such a striking version of a story that is familiar to most of us. Max Schreck’s portrayal of Count Orlok as a sinister and yet also pathetic figure is so different from Bela Lugosi’s seductive portrayal of Count Dracula in Todd Browning’s 'Dracula' (1931) and it brings out the vampire’s eerie other-worldliness. Studying the film helps us to appreciate the mastery of German film-makers in the silent era – when the German industry was possibly Hollywood’s biggest rival – and just how much they contributed to the style and atmosphere of horror film into the present."

If you have an interest in world cultures and want to learn about the ways in which these cultures are expressed through film, then take a look at our Film Studies degree course.