Beyond Exclusion in Medieval Ireland

The Institute of Irish Studies’ Leverhulme Fellow, Dr Stephen Hewer, recently published a book on the legal status of different groups in medieval Ireland. The Institute hosted a book launch on 16 March. Here, he details the processes of making the book and some of the major findings.

The book is a thorough re-examination of the legal status of minorities in the English-controlled parts of Ireland, c.1250-1320. It is a discovery of the (large) limits of the English court records as sources for social and cultural studies of medieval Ireland. Many people might guess that a medieval court roll is a boring and dry record of lawyers arguing over 1 acre of land – sometimes they are! – but the records also are a window into an otherwise hidden society.

First, before anyone runs off to read these records, you should know that they are written in abbreviated Latin in a different type of ‘cursive’ (cursiva anglicana). The rolls and copies of rolls do not provide any guides to the abbreviations and many use ‘etc.’ to skip over formulaic wording. Most court cases were written to match the wording of a ‘brief’ or ‘writ’ (breve: Latin for short letter) that dictated the wording in non-exceptional cases. Over the decades and centuries, the types of cases grew from a handful to hundreds. Much later, after the invention of printing presses, the formulaic style would lead to fillable forms and save many clerks from hand and wrist injuries.

Once you know medieval insular Latin, palaeography (old handwriting), and the phraseology of medieval English writs – or, if you are fortunate, you find a fully translated edition of a roll, you still have to learn interpretive theories (‘law-in-action’, legal realism, decolonial studies, and especially intersectionality). These records were written in a colonial context and require certain critical skills to read them. We must recognise the positionality of the court clerks and the courts. The English had been in Ireland 85 years at the beginning of the study. Some were fourth or fifth generation settlers in Ireland, others were immigrants from England or simply temporarily in Ireland. The English did not rule over all of the Island of Ireland. They held most of Leinster, most of Munster, most of Connacht, southern Mide (the province, not County Meath), and Ulster east of the River Bann. This was not a single entity either, it was an assemblage of colonies.

While searching through the court rolls, there are other hazards. The clerks usually recorded the ‘pleas’ (arguments) by both parties. A plaintiff usually could only make certain claims: I held 30 acres and John illegally ejected me on the Monday after Michaelmas last year. A defendant could make almost any claim: my name is not John, those 30 acres are actually only 29 acres, the plaintiff is unfree, I have a royal protection from lawsuits, those 30 acres are actually in another village than claimed, I have a cousin and she was not named in the brief, I gave that land back yesterday, etc. etc. The hazard is that one can easily confuse these claims for ‘the law’. The ‘law-in-action’ method teaches us that ‘the law’ (for this study) is only what the courts judged was ‘right’ and ‘wrong’ and what court orders were actually enforced. The king of England could order the English of Ireland to take the lands away from a group of people or to guard the lands of a different group, but if the colonial administrators did not follow the orders, the orders were fairly useless. This general example actually happened many times in the 13th and 14th centuries. Henry III, Edward I and Edward II of England would send repeated orders for the same thing, telling us that the local admins were not enforcing (or could not!) the first order.

Armed with all of this theoretical background, we can dive into the discoveries from the book. The court rolls reveal a more heterogenous society in 13th-century ‘English Ireland’ (shorthand for the assemblage of colonies). Many historians had proposed that English Ireland was a binary of free English and unfree ‘Irish’, but in the rolls we find Gaelic women and men suing for their lands held in fee (feudally), other Irish ethnicities: the Ostpeople (Gaelic-Scandinavian Irish, such as Mac Óttarr), difficulty for Irish Sea Region peoples: Scots and Welsh, difficulties for women in general, and special privileges afforded to clergy. Sorting out the intersections (intersectionality was coined by Professor Kimberlé Crenshaw, UCLA/Columbia Law School) between these groups uncovers that being ‘English’ did not always automatically make someone legally ‘free’. Married English women could not sue without their husband being named in the brief, and being able to sue on your own was a test of freedom. Some English women had exceptional power in certain situations. Joan de Valence was not able to pick her husband or what he did with her lands, but after he died, she interrupted a criminal case to protect her ‘liberty’ to prosecute and hang criminals in her private court. 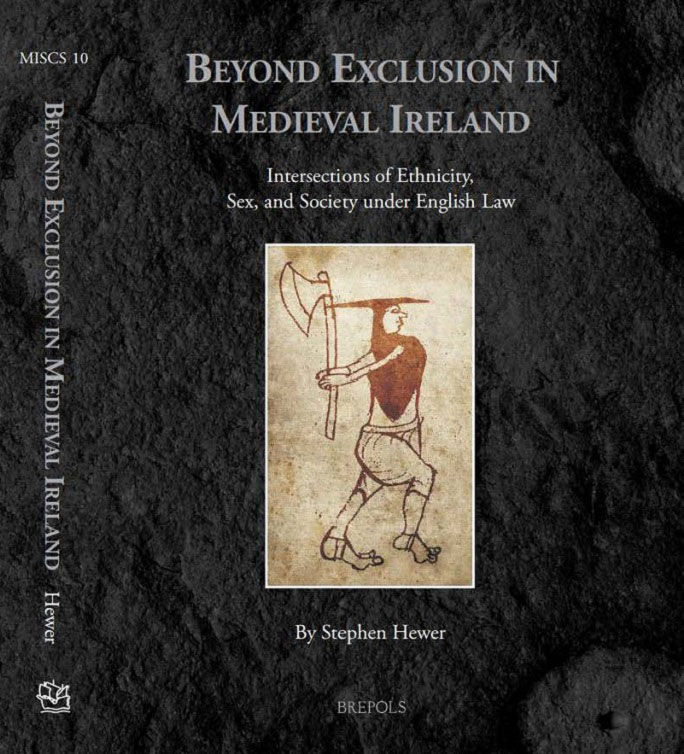 The book is full of more discoveries, such as the existence of Gaelic men as royal bailiffs exercising power over English tenants and that it was a crime to steal from unfree Gaelic people. You can order a copy here: http://www.brepols.net/Pages/ShowProduct.aspx?prod_id=IS-9782503594576-1 Or ask you local library to get a copy!