Women and military power in the tenth century

In Game of Thrones and Vikings, viewers have seen representations of women warriors and military leaders in medievalesque settings, but how accurate is this a reflection of women in the past? Dr Clare Downham from the Institute of Irish Studies explains.

In 2017, DNA testing of a tenth century burial from Birka in Sweden showed that a grave long considered to be a man’s belonged to a woman. The grave (Bj 581) contained two shields, a sword, an axe, two lances, twenty-five armour piercing arrows, a fighting knife, two horses and gaming pieces, and  two horses with riding gear . While many seized the news with enthusiasm as proof of a historical warrior woman, others reacted with anger or scepticism. The evidence does not fit with many people’s perceptions of a woman’s place in tenth century society.

The burial of women with weapons is not unique in the tenth century, although they are very unusual. Impressive arrays of military gear accompanied female burials discovered at Aunvoll and Solør in Norway. Further research will probably yield more examples. Naturally, this raises questions about sex and gender. Could the woman at Birka have lived socially as a man without the knowledge of wider society, like other examples of women who engaged in warfare by adopting a male persona in European history? If so, the discovery that she was a woman in death did not prevent burial with full honour.  Another possibility is that the Birka woman was recognised as fulfilling a military role normally associated with men. As grave goods and gender do not always ‘match’ according to our social perceptions (i.e. weapons are not exclusive to men), grave goods may have been selected to reveal more about social status than social gender. So was it possible for women to become military leaders in the tenth century?

The best known example to an English speaking audience is Aethelflaed, of Mercia. Aethelflaed was the eldest child of Alfred the Great of Wessex. Growing up at Alfred’s court, she was educated in literature and could witness political strategy, planning for war and diplomacy at first hand. She went on to marry to her father’s ally, Aethelred lord of Mercia. Bu when Aethelred became ill, Aethelflaed took a leading role in government. Aethelflaed is credited with the defence of Chester against a viking attack around AD907. After Aethelred died, Aethelflaed governed Mercia in her own name. She ordered fortifications to be built across Mercia, including those of Eddisbury, Runcorn and Stafford. In 916, she oversaw a military campaign to South Wales and in the next two years captured Derby and Leicester from viking control. Aethelflaed died in 918 at the height of her power after negotiating successful peace treaties with neighbouring peoples.

A Continental example is Gerberga of Saxony sister of Otto I of Germany. In 945-946, she organised the defence of Laon after her husband, Louis IV of France, was captured by vikings. On Louis’s death in 954, Gerberga acted as regent. When Reginar, Count of Hainault seized some of her lands in Lotharingia, Gerberga is said to have sent spies to Reginar’s stronghold, using their intelligence to send a small force to capture Reginar’s wife and children, forcing him to sue for peace. The record of Gerberga’s deeds indicates that a tenth century chronicler was happy to credit a woman with leading military strategy and the account was believable to contemporaries. 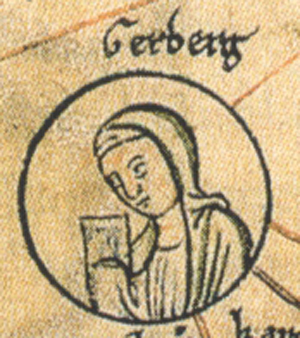 Another case is Olga, the wife of Igor of Kiev. Igor was slain in 945 while attempting to reassert control over the Derevlians, an east Slavic population group. Olga then became regent. After defeating the Derevlian nobility, Olga and her young son sent an army to the city of Iskorosten where her husband was killed. According to the Russian Primary Chronicle she demanded a tribute of pigeons and sparrows from each house, claiming “I require only this small gift”. However, she ordered matches to be tied to the birds legs at nightfall so that when they all flew home the city was burnt down. While the account maybe exaggerrated, Olga seems to have directed military operations which brought the Derevlians to heel. She was also credited with a series of fortifications built to gather tribute and trade.

These historical women oversaw military campaigns but do not seem to have directly engaged in fighting. Throughout recorded history, women are usually excluded from combat. However, there are women warrior groups in history (such as the Dahomey of Benin), and there have been societies where women could choose to fight as men (as encountered by Conquistadors in South America). Sometimes women were allowed to fight when there was a shortage of men, as at the siege of Jerusalem in 1099. An eleventh century historian claims that women of the Kievan Rus fought and died alongside men at the Battle of Dorostopol in 971. There are also portrayals of women warriors in medieval literature but to what extent these reflect fantasy rather than reality is debated.

Women in tenth century Europe could wield military power, although usually when acting in lieu of a male relative or spouse. With these examples in mind, it should not be shocking that a woman at Birka was buried with the honour of a military leader. The position of women is far from static in the Middle Ages, despite stereotypes to the contrary. Further research is needed to understand these fluctuations in status and power. The tenth century certainly offers some interesting examples to think about.