The ‘Viking Wirral on Wheels’ cycle tour was the brainchild of Craig Pennington, organiser of the Future Yard music festival at Birkenhead in August 2019 and Don Maclean of Ryde bicycle cafe in Liverpool. Dr Clare Downham provides an overview of the day.

The tour was based around a selection of sites from the ‘Viking Age in the North West’ free smartphone app. It was a pleasure to be invited along to provide academic content and talks at different stopping points along the trail. The ride was offered as a cultural activity accompanying the Future Yard music festival in Birkenhead during August bank holiday weekend. The weather was fantastic and we took a leisurely circuit with a pub stop over a five hour time-frame. The nineteen mile cycle route, can be accessed here.

The cycle route started at Birkenhead Priory. The Priory was a venue for a number of the Future Yard festival performances. It is the oldest standing building in Merseyside. Founded in 1150, the monks would go on to supervise the first regulated ferry service across the Mersey.

The next stop on the tour was by Bidston Parish church. An important piece of Viking Age sculpture was discovered nearby in 2004 with two snarling beasts heads and interlace. On the nearby Bidston hill, some carvings into the rocks have been interpreted as figures from Norse mythology, although their style suggest that the carvings were made much later on. 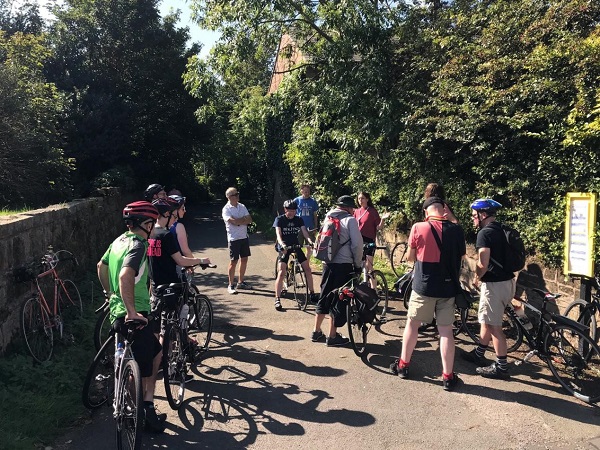 At Moreton, we were joined by Prof Stephen Harding of Nottingham university who has written several books on vikings in Merseyside. A series of Viking Age houses have been excavated at Digg Lane in Moreton, one of which showed distinct parallels with the type of houses built in Viking Age Dublin.

Following a footpath at the end of Gainsborough Road in Upton, we visited the site of the ancient church of Overchurch, the only visible evidence of which is the curvilinear earthen enclosure in which the church once stood. A ninth century Anglo-Saxon runic stone was recovered from this site which reads “The people erected a memorial...Pray for Æthelmund.” The stone is now in the collection of the Grosvenor Museum Chester.

The route continued through Greasby and Irby, considering the Scandinavian-influenced placenames of these sites and Viking Age archaeological discoveries that have been made. The place name Irby is particularly interesting as it means ‘settlement of the Irish’ pointing to the immigration of a mixed population of Scandinavians and Irish in the area.

A highlight of the trip was a visit to Thor’s rock at Thurstaston. Thurstaston is a Scandinavian name ‘the farm of Thorsteinn’ and legends of Thor have developed concerning the sandstone outcrop since the late nineteenth century. This was the furthest point from the start of the journey and the way back is an easier ride.

We stopped at Thingwall which was a Viking Age assembly place on the Wirral. There is an information board about the site at the Basset Hound Pub which was a welcome stop for refreshments and provided an opportunity to view the mural on Wirral’s Viking Age history inside.

On the journey back towards Birkenhead we discussed more early place names in the Wirral and stopped at Storeton to discuss the famous Battle of Brunanburh which was probably fought in the area in 937. Recent work by ‘Wirral Archaeology’ has brought to light numerous finds from the Viking Age.

Our final stop before Birkenhead was Tranmere, a Scandinavian name meaning ‘sandbank of the crane-birds’. The cycle tour was a great way to see some Wirral sites and there is scope to develop more cycle routes to take in a number of the sites not mentioned here.