Shame, stigma, and the abortion debate in Ireland

Exploring the stigma and shame surrounding abortion in Ireland, Masters student Rebecca Boast looks at both sites of the debate, in the lead up to Ireland's referendum.

"Enacted in October 1983, the eighth amendment to the Irish Constitution gave the life of the unborn equal value to that of the pregnant woman. This formalised the illegality of abortion in the Irish Republic under any circumstances, except when the life of the mother is in serious danger.

Being unable to obtain a safe and legal abortion in Ireland has meant that on average 62 women per week will travel to Britain and further afield to terminate a pregnancy. Should the eighth amendment be repealed, it would allow women in Ireland to access abortion “on demand” up to the twelfth week of pregnancy.

While women can travel for abortions, this ability is facilitated by financial means and therefore automatically restricts the options of women with lower incomes. This financial constraint subsequently leads to unsafe alternatives to ending a pregnancy, such as buying abortifacients from online retailers or attempting to self-abort. When speaking to VICE News, the former President of Planned Parenthood USA Cecile Richards commented that:

“If a women is determined to terminate a pregnancy, she will do it whether it is safe or not.”

Stigmatic shaming from both sides?

The 'Yes' campaign has adopted ostensibly positive imagery, using pastel colour schemes, whereas the 'No' campaign has often featured graphic images with heavy red fonts on its posters and badges, giving an aggressive tone to the campaign. The association of aggression and forceful campaigning with the 'Save the 8th' campaign would lead us to believe that the pro-life lobby are solely responsible for stigmatic shaming in the debate; however, this not the case.

A headline from the Guardian online states that pro-life supporters are in fact “pro-death.” This use of emotive language is effective in shaming the pro-life lobby as it implies that they support maternal mortality – a leading cause of which is unsafe abortion. 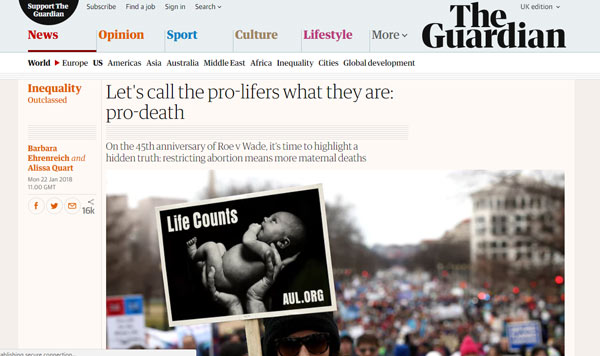 Similarly, the Save the 8th campaign has used mother-and-child imagery to evoke guilt among the audience. The tagline 'Abortion: kills one, hurts another' is a commonly used phrase in pro-life campaign strategies. In fact, the claim that abortion hurts women has no scientific basis and has been disproven via in-depth research. 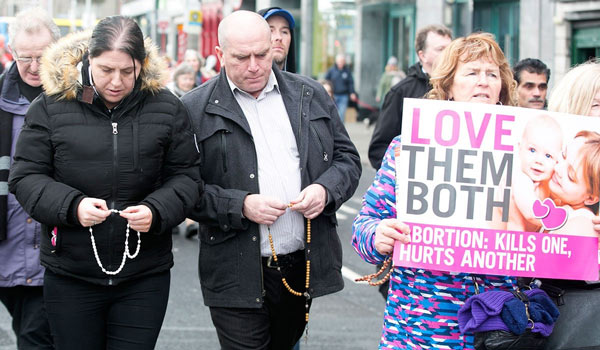 The impact on the Irish referendum

Approaching the abortion debate through the lens of stigma and shame theory has highlighted the aspect of exposure that we, as individuals, go through when experiencing shame. Stigma is defined by Goffman as an attribute which “disqualifies an individual from full social acceptance”, the applications of this are manifold and make the theory well-suited to this research.

The idea that it is shameful for a woman to seek an abortion is one that permeates the debate and informs the opinions people have on abortion rights. Bearing this in mind, the shame and stigma enveloping abortion may well be the deciding factor in the outcome of the Irish referendum.

Exploring the impact of stigma and shame on the Irish referendum vote will provide a basis of knowledge for application in other societies that move towards legislative change concerning reproductive rights."

Rebecca is currently an MRes student with the Institute of Irish studies, and is set to begin a PhD later this year. Rebecca's research interests are women's studies, female reproductive rights and more specifically abortion stigma and shame in Ireland.