Can you display statues relating to empire sympathetically?

Elizabeth Colenso is a first-year student studying Sociology and History at the University of Liverpool. Here she chats to us about conversations she and fellow History classmates had with the National Trust after the Trust's removal of a problematic statue previously in front of the Dunham Massey estate.

Discussions with the National Trust: is it possible to display statues relating to empire sympathetically?

Earlier this month the National Trust gave myself and fellow History students studying “The Global History of the Present” the opportunity to have our voices heard on a crucial matter: the future of a statue Dunham Massey removed following recent Black Lives Matter protests. Recent protests have included the toppling of a statue of Edward Colston in Bristol Harbour by protesters over his involvement in the slave trade and the decision by Oriel College, Oxford, to remove a statue of the imperialist Cecil Rhodes. The statue that we were invited to discuss was formerly at the front of the Dunham Massey. It is a degrading representation of a black man carrying a sundial.

We joined a live online discussion with Emma Campagnaro, the Collections and House Manager at Dunham Massey to offer suggestions and feedback to the National Trust on how it could redisplay the statue in both an empathetic and educational way. At first the student discussion focused on how we could use the statue to educate the roughly 750,000 people who visit the property annually, in light of the ways in which empire is whitewashed in the English History curriculum and in public debate. We considered things like making leaflets available and putting up an information board that could inform visitors of the history of the 18th century statue, which would link it to the history of Britain’s empire, in particular issues relating to slavery and race. This would, we felt, enable the Trust to talk about the statue in a sensitive way while encouraging thought-provoking discussion. 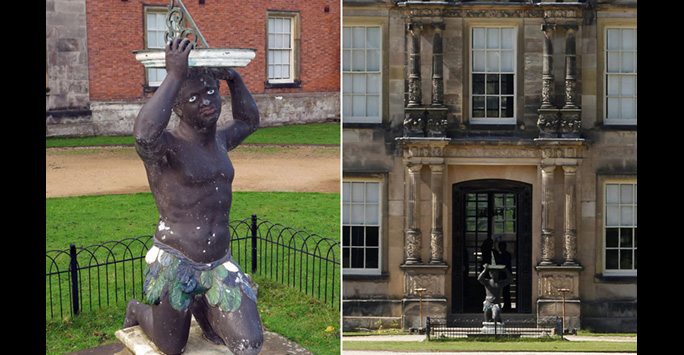 While some students were initially in favour of simply disposing of the statue (which, we discovered, is not something that the Trust can or would do), we came to the conclusion that to remove it from the public eye would serve to contribute to the general amnesia about the nature of empire in Britain, and further postpone the long-overdue reckoning that Britain needs to have with its imperial past. The statue, we felt, could be used to generate dialogue about both our national past – including that of National Trust properties – and the experiences of marginalized groups in society.

The students who took part in the discussion did so, I felt, in a way that was both sensitive and reflective of the issues of empire and its legacies that we have been exploring in our module “The Global History of the Present”. I also appreciated the opportunity to interact with Emma and learn what ideas the National Trust had already been considering regarding the statue.

I feel that it is our responsibility as young historians to begin attempting to right the wrongs of Britain’s imperial and colonial past, and contributing to decisions about this statute provided an opportunity for us to help a powerful institution do just that.

The discussion helped show us, in addition, that studying history entails not just learning about the past but using this knowledge to actively change the present.

It will be fascinating to see what the National Trust decides to do with the statue. I hope it will also encourage more discussion between institutions like the Trust and students and encourage young people to actively make a difference in a climate in which it often feels like our voices are not heard.