As part of the Royal Society Summer Science Exhibition 2017, which ran for a week (3rd-9th July 2017), a team from the Department of Chemistry showcased some of the cutting edge research carried out in the group of Prof. Andrew Cooper FRS as part of their exhibit stand ‘Molecular Cages – The Hole Story.’ Selected from a competitive application process, the team were selected as one of only 22 exhibitors, and brought to life the research around porous organic cages through a series of hands-on interactives. Over 14,000 people attended during the week of the exhibition, and ‘The Hole Team’ thoroughly enjoyed engaging the public in their research.

ChemTube3D is a freely available web site based at the University of Liverpool aimed at students, lecturers and practising chemists.

The web-based interactive simulations of Materials and Polymers now available in ChemTube3D were created as part of a HEA Physical Sciences Centre Development project that enjoyed additional support from the Portfolio Partnership and funded two summer undergraduate students.

The Solid State section was developed by Sze-Kie Ho, now in her final year at Oxford University while Lyndsey Vernon, currently a third year MChem at Liverpool, created the polymers section.

The annual Times Cheltenham Science Festival is one of the largest in the UK, celebrating all branches of science and putting it on display to the public. The Discover Zone is the Festival’s free interactive demonstration area, showcasing a variety of eye-catching scientific principles and products. For this year’s Discover Zone, the Cooper Group was invited to lay out a stall exhibiting Dry Water chemistry as part of the EPSRC Impact Trail.

Ben Carter spent the week demonstrating the seemingly mad science behind dry water and liquid marbles, and the uses these materials can be put to in gas storage and catalysis. School groups, scientists and members of the public were able to see water being blended into powder before their very eyes, before then seeing the water squeezed out again. Liquid marbles were also a big hit: these larger analogues of dry water are easier to see, and made a big impact on the pupils from Bledington Primary School.

Ben then spent a further day at the Catalyst Chemistry Museum in Widnes, as part of the RSC team supporting Chemistry at Work week. Pupils and teachers from a  number of local schools were able to see dry water chemistry up close and personal.

The Liverpool RSC Younger Members Committee organised a series of short talks by a variety early career chemists, for the benefit of Chemistry students at the University of Liverpool. The aim was to provide inspiration for those wondering what they could do with their Chemistry degree. Alongside the Cooper Group’s Ben Carter were employees from Tata Steel, Rockwood Additives, ACAL Energy, the RSC and Laser Micromachining Ltd, discussing how they progressed from graduation to gainful employment. With some 70 students in attendance, the event was a big success, and plans are afoot to run more in the future. 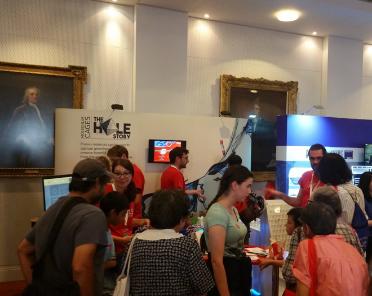