Dr. Lauren Arrington was awarded two prestigious residential research fellowships for 2016-2017 at the Harry Ransom Center Humanities Research Collection and at Trinity College Dublin's Long Room Hub to consult manuscripts in connection with her new project.  Lauren is the author of two acclaimed monographs on the history and politics of early twentieth-century Irish literature; her new book will incorporate British, German, and North American writers into her analysis of the transnational politics of Late Modernism. 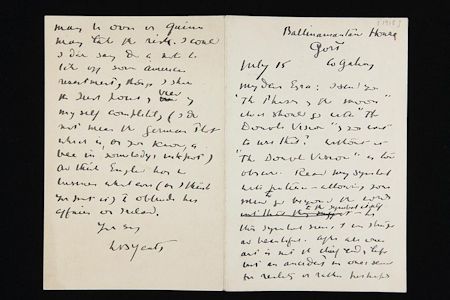 Yeats and Pound sustained a long friendship that was important to the development of the aesthetics of both; this letter from W.B. Yeats to Ezra Pound is dated 1918, in the interim between their major periods of collaboration at Stone Cottage (1913-1916) and Rapallo (1928-1932).  Photo credit: wikicommons

During the consolidation of Mussolini's regime, W.B. Yeats and Ezra Pound - two of the foremost poets of Anglophone late modernism - were at the centre of a network of international writers and artists who gathered at Rapallo, Italy.  Lauren is analysing the way that the political climate in early fascist Italy and the perceived political crises in their native countries affected these writers' concepts of history, civilisation, education, the state, and revolution: all major themes in their work.  Rapallo presents a new way of reading two of the most important poets of the twentieth century and of understanding the way that modernism evolved in provincial Italy after its heyday in Paris and London.

Rapallo is a timely intervention in the emerging field of Late Modernism and contributes to the developing genre of group biography, as well as to new literary-critical methodologies through Lauren's integration of intellectual history and genetic criticism.

Who was at Rapallo?

Ezra Pound visited Rapallo in 1923 and settled there with his wife, Dorothy Shakespear, in 1924.  W.B. Yeats and his wife and collaborator, George, arrived in 1928, and they kept an apartment there until 1934.  Other visitors in this period include the writers Richard Aldington and Brigit Patmore; the Northumberland poet Basil Bunting; poet and translator Robert Fitzgerald; poet and publisher Richard Aldington; playwright Lennox Robinson; writer and painter Adrian Stokes; writer Emil Ludwig; poets Thomas MacGreevy and Louis Zukofsky.  Other long-term residents included composer George Antheil, theatre designer, Edward Gordon Craig, and dramatist and novelist Gerhart Hauptmann.

Why is Rapallo important?

The activities of the Rapallo circle represent an important shift from high modernist style to a new aesthetic - late modernism - that is more directly engaged with popular discourses.  This is exemplified in the interrelationships of the elder W.B. Yeats, the middle-aged Ezra Pound, and the younger poets, Basil Bunting and Louis Zukofsky.  Yet the difference is not simply generational; for example, the culture at Rapallo was important in precipitating important changes to Yeats's verse that occurred between The Tower (1928) and his next volume, The Winding Stair and Other Poems (1933), much of which was written in Italy.