During a recent two-week stay in London organised and funded by the Department of Histories, Languages and Cultures, a group of undergraduates, including Lewis Braithwaite, tackled the topic of economic migration to the capital. They approached the subject from various perspectives, and Lewis focused on ‘the Irish experience’ in the twentieth century.

As Britain approaches Brexit, the Irish border question becomes an ever more heated topic of debate. But with the political focus on the dispute between a hard or soft border and the possible compromise of a customs union in the Irish Sea, the movement of people between the islands, rather than across the land border, can be neglected

Rural Ireland of the 1940s and 1950s provided little opportunity to more than a single son of a usually large family, which pushed over 40,000 Irish citizens a year towards Britain’s cities. Manual labour became the staple occupation for young Irishmen moving to London, whether that be in the wartime industry of the 1940s or construction work after the Second World War. For female migrants, domestic service and healthcare were the most significant sectors for employment. 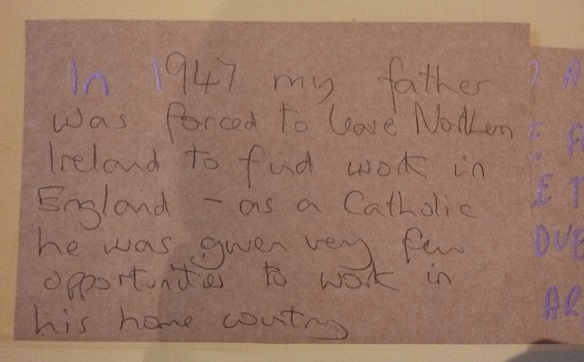 A note found during Lewis's research into economic migration in London

The economic push for female migrants was different to that of males, with many women claiming that their move to Britain was not only economically motivated but driven by the desire for personal freedom in a cosmopolitan society.

One story told by a young man living in North London in the 1950s gives an idea as to the scale of Irish migration from small communities. He recounted that one evening, he met with 17 of his ex-peers who had attended the same rural Irish school, all of whom were now living in or around London.

In the 1980s and 1990s and at the beginning of Celtic Tiger, Irish migration took a turn away from the ‘old wave’ of those hoping to escape the economic instability and lack of opportunity in rural Ireland. Instead, a new wave of of financially stable migrants were drawn across the Irish Sea to global cities like London for opportunity to gain greater economic prosperity. The positive contribution of Irish migration – not only culturally but economically – cannot be neglected in the current Brexit negotiations.