"The obituaries and statements from public figures following the death of Martin McGuinness ranged from Tony Blair’s generous tribute to Norman Tebbit’s spiteful, if understandable, pettiness. One of the dominant themes in the media coverage was of McGuinness’ transformation from ‘guns to government’ and of the stages along the way from his role as IRA commander in Derry to Deputy First Minister of a state he had been pledged to destroy.

Young but still sufficiently senior in rank, McGuinness became a member of an IRA delegation (including Gerry Adams) that was flown to England to negotiate with the Conservative government in 1972. There have been interviews reminding us of his support for the ‘cutting edge of the armed struggle’ and his justification that ‘the IRA’s campaign was the only way to end British imperialism’s control of Ireland and reunite the country’. These have usually been contrasted with accounts of his (and Sinn Féin’s) movement into constitutional politics and ministerial office following the Good Friday Agreement in 1998.   This culminated in the quite extraordinary ‘Chuckle Brother’ relationship that McGuinness enjoyed with Ian Paisley in government after 2007, alongside other symbolic turning points such his handshake with Queen Elizabeth during a visit to Belfast or his condemnation of dissident republicans as ‘traitors to Ireland’.

All the obituarists and commentators have agreed that Martin McGuinness’ journey was historically significant and most acknowledged that both the political transformation and personal relationships he enjoyed with many former political enemies were genuine. But McGuinness’ wider importance went beyond his personal story, embodying not only his own life experience, but that of the movement in which he was a leading figure for most of that life.

I did not meet or interview McGuinness as part of my research into Irish republicanism, but I have met countless republicans who said that for active members of the IRA in the 1980s, 1990s and 2000s the line ‘if it’s good enough for Martin, it’s good enough for me’ became axiomatic as previously unthinkable positions recognizing the Northern Irish state, its legal and policing system, and entering its government were adopted by the Provisionals. 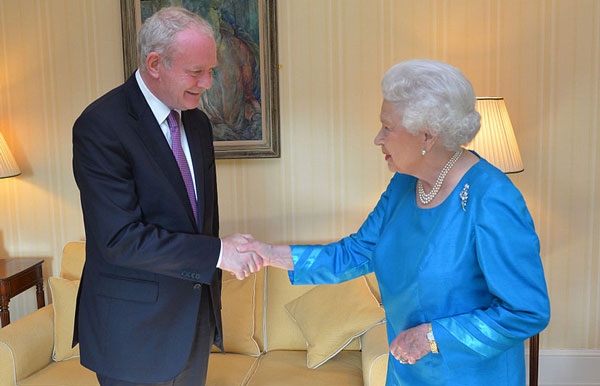 Together with Gerry Adams, Martin McGuinness kept the Provisionals largely together throughout all the stresses and strains of the peace process and ensured that the dissidents who split away did so at different times and on different issues, so as to remain a largely marginal force. As Jonathan Powell, Tony Blair’s chief of staff, acknowledged in his memoirs, having republican interlocutors who could keep the IRA together and bring most Provisionals on side was essential during the peace process and a key to the success of the British government’s strategy.

This role within the republican movement is perhaps McGuinness’ greatest achievement and is certainly the essential precursor to his more public roles in government or as a figurehead for reconciliation. In this sense his life is of a piece that cannot be simply divided into an early violent phase and a later political career. As with the movement he led throughout the Troubles you cannot have one without the other: the IRA volunteer and the politician were both the same, yet also radically different people, formed and ultimately defined by the historical events and dramatic circumstances that shaped them and Ireland from the late 1960s."