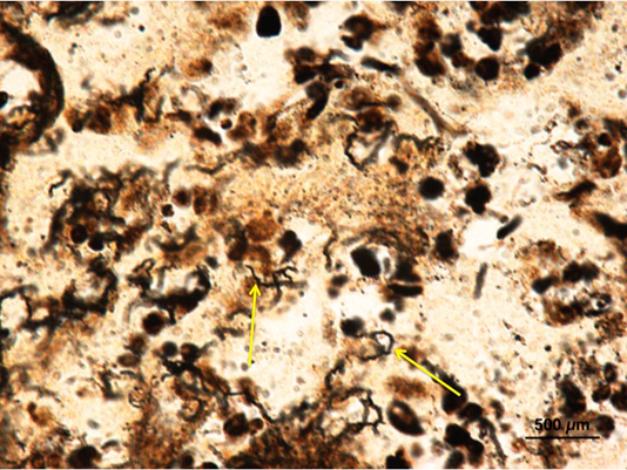 The Treponema spp. bacteria are spiral and are shown here highly magnified and coloured black.

For some time, there has been debate over the role of Dichelobacter nodosus (the causative agent of ovine footrot) CODD lesions and since the initial early outbreak several studies have shown strong associations between footrot and CODD

It is possible that both these theories are true.  From studies examining risk factors for CODD, similar risk factors to those that are associated with footrot were shown to be associated with CODD.  For example, both CODD and footrot are associated with housing as well as potential trauma to the feet from poor pasture.  Also, cases of footrot can precede cases of CODD in individuals and therefore colonisation by D. nodosus may act as the traumatic incident necessary for colonisation by Treponema spp. subsequently.

In conclusion, the current available evidence is suggestive that the BDD associated Treponema spp. are involved in causing CODD, whilst the role of other organisms such as D. nodosus is uncertain.  Further work into the cause of CODD is ongoing.

More details can be found in the following published papers: