Just like the rest of Europe, the face of Liverpool changed drastically during the Second World War. The May Blitz was the most devastating event that shook Liverpool to its core. The bombings lasted for eight nights and devastated the city and its surrounding suburbs. 1,900 people were killed, 1,450 seriously injured and over 70,000 people were made homeless. Winston Churchill later praised the strength of Liverpudlians, stating: “I see the damage done by the enemy attacks, but I also see the spirit of an unconquered people.” The effects of the war are still felt today and can be seen through our iconic buildings that many of us have passed without really taking notice. Perhaps next time we encounter the buildings on our list below we will appreciate everything that they symbolise and all that they have done and still do for the Liverpool community.

The iconic structure stands tall and proud in the centre of the city. The Hall was opened in 1854 and was the neoclassical vision of Harvey Lonsdale Elmes. Elmes designed the Greek-Romano hall featuring a decorative row of columns classed as some of the finest in the world. The famous concert hall boasts a 165-year-old tiled Minton Floor which comprises 30,000 decorative tiles along with a world renowned Willis concert organ. On 21st and 22nd December 1940, St George’s Hall suffered a hit by incendiary bombs. Part of the building and the organ was damaged but thanks to the efforts of Civil Defence Workers and firefighters the building was saved from more serious injury. The Liverpool Cenotaph was erected on St George’s Plateau in 1930 and was designed Lionel Budden who went on to become the Roscoe Professor in Architecture at the University of Liverpool. The memorial features both tributes to the First and Second World Wars.

More commonly known by locals as the bombed out church, St Luke’s is a true icon in Liverpool. Standing between Bold Street and Berry Street, the church is often used as a convenient meeting place. However the events of 1941 devastated the building, making the structure what it is today. During the first eight days of May 1941, Merseyside was bombed almost every night. St Luke's was just one of the many churches that was devastated by the May Blitz. It was however left to stand as a permanent memorial to the events of 1941. The shell of the church became a symbol of Liverpool’s fighting spirit, that no matter what hit the city, the people were resilient. Today, it honours the thousands of Liverpudlians who tragically lost their lives during the conflict. 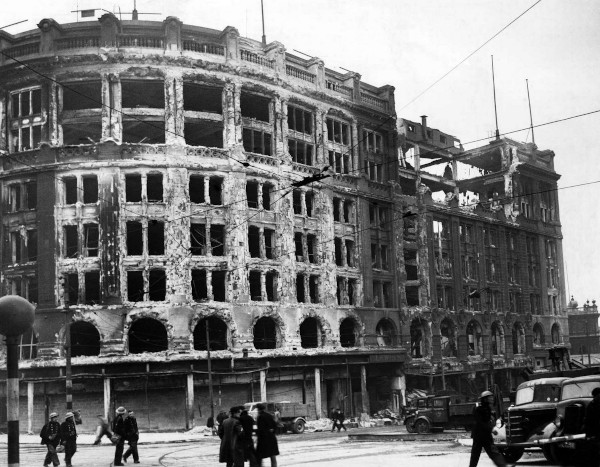 Lewis’s opened its doors in 1856 and was a busy shopping hub for Liverpool locals. The success of the Liverpool store led to the subsequent opening o branches in Manchester, Sheffield and Leicester. The Store had had it’s fair share of devastation after suffering the infamous fire of 1886 which burned down the entire building. However the most devastating event in its history during the May 1941. On 3rd May, the shop experienced another busy day serving customers yet by the night the building had been destroyed, leaving only its shell.

The store was completely re-built after the War and re-opened its doors in 1951. To mark the significance of the new store and as a symbol of remembrance the Liverpool Resurgent was mounted above the entrance. More commonly known as ‘Dickie Lewis’, the 18 foot bronze sculpture depicts a naked man raising his arms. It symbolises Liverpool's resurgence following the war, its designer Jacob Epstien was given the instruction to create something large and imposing that would represent the strength and resilience of the port and city of Liverpool. 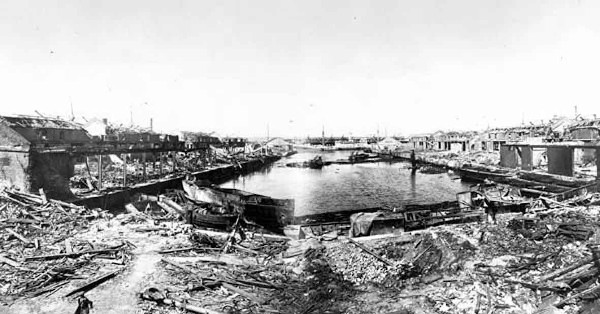 The Albert Dock is a local and tourist hotspot alike. Attracting almost 6 million visitors a year, it is now a coveted spot to catch a coffee, fill your belly and feed your cultural hunger. But during the war, the Docks were a strategic tool in securing essential war materials. Liverpool was the most bombed area outside London. The city played an essential role in the Second World War offering the largest port on the west coast and was the main link to North America. The port handled 90% of Britain’s war materials from overseas. During the May Blitz, the Docks were the main target of the consecutive 8 day bombing attacks. Almost 70 out of the Dock’s 140 berths were destroyed. This contributed to a significant decrease in the amount of resources and cargo entering the city. The port did however remain functional and thanks to this, it is said that the Battle of the Atlantic was fought and won in Liverpool.

In 1998 the statue of Captain ‘FJ’ Johnny Walker by Liverpool sculptor Tom Murphy was unveiled by the Duke of Edinburgh. The sculpture stands on the pier head, honouring the man who sank more U-boats during the Battle of the Atlantic than any other British or Allied commander. Walker commanded the most successful anti-submarine fleet based at Gladstone Dock. It was said that he worked tirelessly which led to his early death in 1944. Today, people pay tribute to this naval hero by laying down flowers and poppies on the sculpture on remembrance day.

On the 75th Anniversary of VE Day, we will remember the brave people who fought for us and the life we are able to live today. Our history lives in the buildings that we see everyday and they remain as a reminder of the struggle the Liverpool people faced during the 1940s.