History student Caleb Howie gives his opinion on how the Black Lives Matter movement has been misunderstood and misrepresented by some sections of society.

Support for the Black Lives Matter movement has grown rapidly in recent months due to the reinvigorated anger against systemic racism and police brutality. Although these issues have been rife for generations, cases of George Floyd, Breonna Taylor, Ahmad Aubrey have highlighted and exposed the problem. Huge protests, rallies and petitions have given people a platform to use their voice, enabling a hope for change in the future.

As a white person growing up in a largely non-diverse community, it is difficult to understand racism because we are not subject to it and it may not be visible to us. Nevertheless, after conversations with friends from the Black, Asian and Minority Ethnic community (BAME) they have explained that racism manifests itself in many forms. There is overt racism through direct hate speech, violence, threats and visible forms of discrimination. Covert racism is less visible such as the degrading, patronising and constant microaggressions people of colour experience.

However, embedded into institutional structures and society, the most ubiquitous form is systemic racism and the UK is no exception. Systemic racism is intrinsically linked to the roots and structures of transatlantic slavery which forced black people to become the slaves and ‘property’ of white slave owners. This created and reinforced the myth of White Supremacy. Therefore, the power relationships derived from these colonial hierarchies continue to adversely affect black people and allow white people to unknowingly benefit from white privilege.

Today, as just one example, this can be seen in the high disproportionate rate of police stop and search tactics against black people. In England and Wales, black people comprise just 3% of the population yet make up 12% of its prison population. Furthermore, a huge 48% of under 18s in custody are from BAME backgrounds and in 2010 the Metropolitan Police charged 78% of black people caught in possession of cocaine compared with only 44% of whites. Therefore, the very systems that are supposed to protect every citizen disproportionately target and criminalise black people. 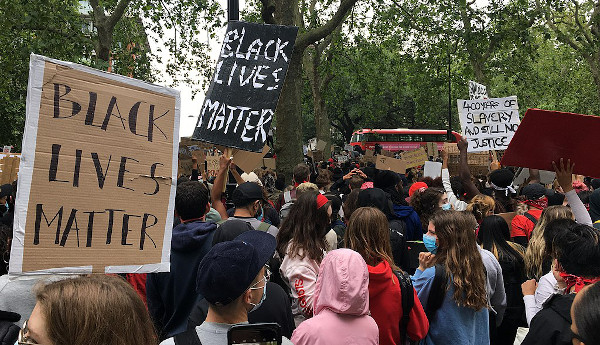 White privilege is therefore the protection from racial discrimination and hate crime as white people will not be attacked, targeted or profiled as criminals at the same rate as black people. But for many white working class people, the concept of their privilege can be misinterpreted. Some may find it insulting as they don’t feel they have a privileged position and they perceive this as undermining their personal or financial struggles.

Another way racism is misunderstood is through the perception that it works both ways. However, as racism is a power structure that reinforces the lie of white supremacy, racism cannot be experienced by white people. However, white people can experience racial prejudice or xenophobia, for example, seen in the case of Tyson Fury. He says that he experiences racist abuse ‘all the time’ due to his traveller background, but what he experiences is discrimination. This is because racism is intrinsically linked to the colonial hierarchies of slavery so reverse racism cannot exist as it doesn’t reinforce power structures or white supremacy.

Although it is upsetting that many claim the BLM movement aims to stoke up agitation and provoke racial tension, this does give us a clear elucidation into the complex issue of white fragility. This can be simply understood as the fear or denial of accepting one’s own white privilege. Here we see phrases such as ‘yes but all lives matter’ and ‘white lives matter’ and this is a huge problem because in Britain today ‘all lives’ simply don’t seem to matter. If ‘all lives’ did matter, then as a society we would all strive to call out inequality and help to magnify black voices. The phrase Black Lives Matter is used to highlight the specific problem of racism, not to agitate a race war. If Black Lives Matter is triggering for you, it may be an indication of your white fragility.

So, many people misunderstand Black Lives Matter, and instead of seeing it as a way of bringing equality, some see it as an attack on white people. Not only does this miss the point entirely, but in actual fact creates the problem of racial tension they are so keen to point out. Here we have to ask who the real victims are. Either privileged white people ‘insulted’ for benefitting from their privilege, or those who have been systematically oppressed for centuries. Whose voice and ergo freedom of speech should take priority? More simply put - should we encourage those who seek to undermine black lives matter or those who are rallying for equality?

Read the remainder of Caleb's piece on his blog page.