What makes a great political poster?

How effective are political posters? Do they always get their party's message across and what happens if they backfire? Dr Andrew Crines looks at the rhetoric of some of the UK's most memorable political posters from the last 40 years.

"When communicating any political message, a party needs to have a good understanding of their audience. Political posters are no exception and they can be very effective for parties if they can use them to engage with the public. A short message with an emotional impact, seem to be what parties assume will resonate with their target audience.

Here are a few of the more memorable moments when political posters have taken centre stage:

During this year's campaign for the UK to leave the European Union, Nigel Farage’s now infamous ‘Breaking Point’ poster was targeted hard at those concerned by immigration. By conflating this concern with membership of the EU, the poster was able to suggest that leaving the EU would reduce immigration and, by doing so, address one of the core concerns of his target audience. Although controversial, the poster appealed to the target demographic because it confirmed those concerns as valid whilst producing a solution (withdrawal).

The Conservative Party poster from the 1979 general election used – ‘Labour Isn’t Working’ – another time that a short message proved effective. This appealed to the public's concerns over industrial action, the fear that Britain was becoming ungovernable, that employment and stability were in decline, and that it was the fault of Labour Party policies. Despite suggestions of an upturn in the economy, the message remained clear that Labour’s economic management and broader political strategies were ineffective. This was compounded by the difficulties faced by Labour in Parliament following defeat during the Welsh and Scottish devolution referenda. 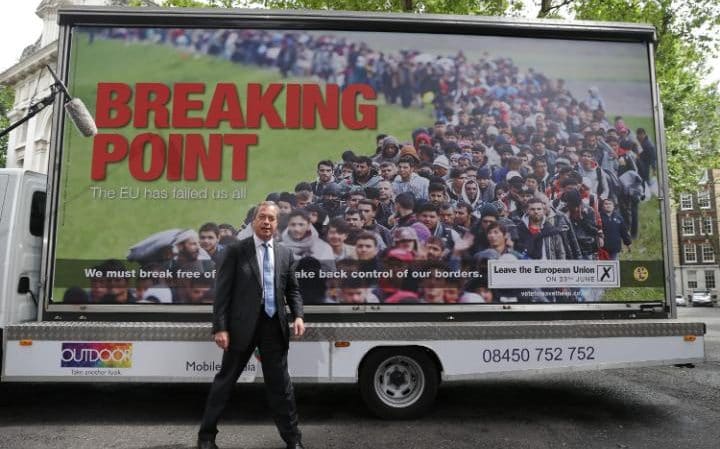 The 1997 ‘New Labour, New Britain’ poster sought to convey the message that – unlike in 1979 – the Labour Party could be trusted with the economy because it distanced itself with the image of internal division, economic uncertainty, and ideological dogmatism. Indeed, the poster was designed to convey the simple message that the Labour Party was new, and that in turn Britain would be renewed. Old Labour was, at best, dead and at worst irrelevant. By doing so, Labour under Blair was seen as being united, more economically competent than it had been in 1979/83, and that although the economy under the Conservatives had improved post-Black Wednesday, Labour were better positioned to continue managing that recovery. New Labour’s ‘newness’ appealed as a different form of government following 18 years of Tory rule.

‘Are You Thinking What We’re Thinking?’ - The Conservative Party

Of course, political posters can also backfire. In 2005, ‘Are You Thinking What We’re Thinking’ led to considerable derision from non-Conservative supporters. The campaign was seen as placing too much emphasis on immigration, presenting a negative argument, and also suggesting that the electorate shared such positions. Whilst it would have been difficult for Michael Howard to have led the Tories back into government (even with a different campaign), it was seen as being an error of electoral strategy because the message lacked a positive vision for Britain or how the Conservatives would govern."

Tell us what you think!

Do you have a favourite political poster? Why do you think it was particularly effective? Let us know what you think in the comments below.