The University of Liverpool has a long and successful history of vaccine research, improving their effectiveness and developing new formulations to fight against devastating infectious diseases.

A clinical trial of rotavirus vaccine in Malawi informed a WHO recommendation in 2009 that children in low income, high mortality countries should receive the rotavirus vaccine. This has dramtically reduced infant diarrhoea deaths as well as informing international policy on rotavirus vaccination programs.

Prior to the introduction of a rotavirus vaccine, rotavirus was the leading cause of severe gastroenteritis, responsible for 250,000 annual childhood deaths in Africa.

The University of Liverpool has led studies of rotavirus diarrhoea in Malawi since 1997. These studies were designed to facilitate and accelerate the introduction of rotavirus vaccines into childhood Expanded Programme on Immunisation (EPI) programmes in Malawi and other low-income African countries. Vaccines developed by GlaxoSmithKline and Merck were known to work well in high-income countries but their impact on protecting children in poorer countries was unknown. 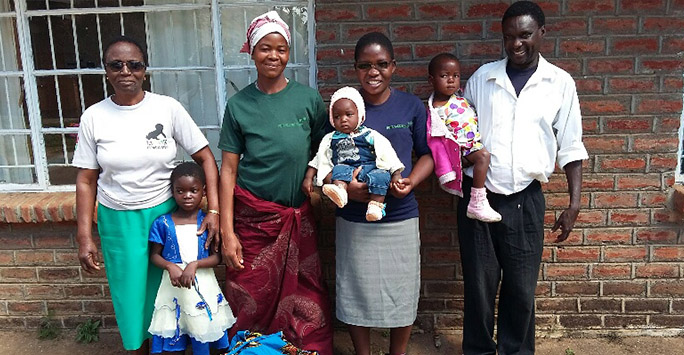 A study nurse and field worker from rotavirus studies with the parents of children who have been involved in the studies.

If you vaccinate children, it has a direct benefit for the children being immunised, who have a high risk of contracting the disease, but it also reduces the amount of circulating pathogens within the community.

The RotarixÒ vaccine was added into Malawi’s infant immunisation schedule in October 2012. In partnership with the Malawi Ministry of Health, the University undertook studies to demonstrate the impact and cost-effectiveness of rotavirus-vaccination across the country.

Through its work in Malawi, the University of Liverpool contributed to a multi-country African study led by the Centers for Disease Control and Prevention, USA which demonstrated that rotavirus vaccination did not result in the development of intussusception (blockage of the small bowel) in African infants.

Research at the Institute of Infection, Veterinary and Ecological Sciences