Research at the Institute of Popular Music has catalysed and informed policy innovations in the Liverpool city-region. Together, these innovations have brought about permanent and productive collaboration across the region’s formerly disconnected sectors of music heritage, music tourism and music industry.

The challenge represented to the researchers was two-fold: firstly, to generate reliable numerical data on the annual amount spent by Beatles tourists in the city; and, secondly, to tackle the complexities associated with what is offered to tourists, and why.

Research on music history and heritage at the Institute of Popular Music (IPM) directly contributed to the recognition of Liverpool as UNESCO City of Music, a status that enabled Liverpool City Council to establish new mechanisms for developing, strengthening and promoting music and the music industries locally, most notably the City-Region Music Board. The research team aimed to inform and strengthen the city’s bid to become a UNESCO City of Music; and to investigate ways of using this status to develop music industry, tourism and heritage.

It has been a privilege to have had this opportunity to contribute to Liverpool’s successful bid to become a UNESCO City of Music, and to the Beatles Report commissioned by Liverpool City Council. These two initiatives have generated innovative policy changes, and new mechanisms and projects designed to develop, strengthen, and promote music, heritage, and the music industries. This was made possible by collaboration with music and heritage industries fostered by the Institute of Popular Music over the past thirty-four years. We are grateful to all those who worked with us, enabling our research to transform music policy on Merseyside.

The research on Beatles tourism was divided between the IPM and the EIUA with the ICC as managers of the project. The EIUA conducted the numerical data analysis while Dr Michael Jones (IPM) and Professor Simeon Yates (ICC) interviewed a wide range of stakeholders, among them the directors of Cavern City Tours (owners of the main Beatles tourism attraction, the Cavern, and operators of the Magical Mystery Tour bus service); the National Trust (owners of two of the Beatles’ childhood homes); and Apple Corps, the Beatles own holding company. 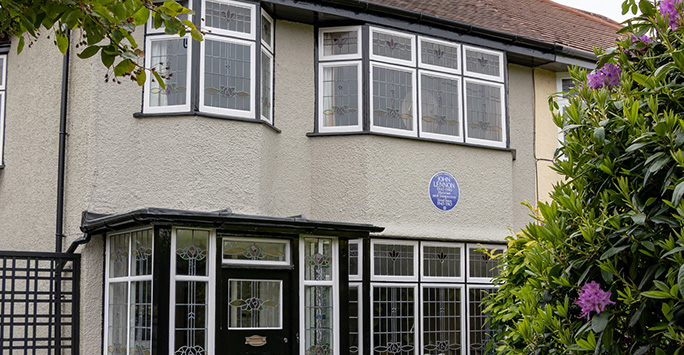 "John Lennon's Childhood Home" by HarshLight is licensed under CC BY 2.0.

Dr Jones also built on findings from historic research on Liverpool music history, heritage and tourism conducted by Professor Sara Cohen and other IPM researchers, among them Dr Holly Tessler, Dr Marion Leonard, Dr Robert Strachan and Mike Brocken. Cohen’s research was conducted through a series of projects and collaboration with local and national cultural organisations. It included ethnographic and archival investigation into the richness and diversity of Liverpool’s popular music past, long-standing efforts to develop the local music industries and formulate music policy, diverse experiences and evaluations of Beatles tourism, and different understandings of music as heritage. This research exposed the sometimes fractious interplay between official and alternative accounts of the musical past, and a palpable lack of cohesion between private and public initiatives in terms of music heritage, tourism and industry.

The research decisively informed measures and policies undertaken and introduced by Liverpool City Council. Firstly, it allowed Jones to identify the recommendations of the Beatles report, including the recommendation that a Beatles Legacy Group (BLG) be created and given a clear and agreed remit to address both the economic opportunities that Beatles tourism presented, and the need to curate and develop Beatles heritage in the city. Secondly, it underpinned the contribution Cohen and Jones made to Liverpool’s UNESCO City of Music bid and steering group.

The Council realised key recommendations of the Beatles Report through its formation of the Beatles Legacy Group, a working partnership between the city council, the university, the Liverpool Business Improvement District (BID), National Museums Liverpool, the newly-created Liverpool Music Office, and Marketing Liverpool. The group helped drive the introduction of a Spatial Regeneration Framework designating areas of Liverpool city centre populated by Beatles-related sites as a focus for improving the tourism ‘offer’.

As a consequence of Jones’ participation in the Beatles Report research and BLG, and Cohen’s research on music heritage, they were invited to become members of Liverpool’s UNESCO City of Music steering group consisting of representatives of the city’s main music and arts providers. Drawing on their research, they made two key contributions to the successful UNESCO application. Firstly, they strengthened its contextual and historical sections. Secondly, they devised three IPM projects that were outlined in the bid, and designed to investigate, launch and promote Liverpool as England’s first UNESCO City of Music. One of these projects resulted in the world’s first Music Tourism convention staged in Liverpool in 2017.

The consolidation and subsequent policy contribution of the Beatles Legacy Group, along with the success of the Music Tourism convention, encouraged the Council to form a City-Region Music Board. Established in 2019, this board is charged with cementing the city region’s position as one of the world’s music capitals and ensuring that music businesses and communities have a stronger voice in local and regional decision-making. The appointment of IPM researchers Professor Catherine Tackley and Dr Mathew Flynn as two of the board’s 16 members, ensured a University of Liverpool presence in the making and transformation of future music-related policies.

Outputs and outcomes are various: the BLG is an output, as are the creation of the SRF, the City-Region Music Board and the Music Tourism Convention. The board and convention show how the winning of Liverpool’s UNESCO City of Music bid, and the formation of the Beatles Legacy Group, promoted a level of cooperation among cultural, arts and commercial music organisations that had not been previously encountered in Liverpool’s history. Research outputs include the Beatles Report (2016), Beatles-related journal articles (Jones 2019 and 2020), and a book on Liverpool’s music heritage (Cohen 2018).

Research in the Department of Music