Equine laminitis is a highly prevalent, painful, debilitating equine hoof condition, which affects one in ten horses and ponies annually. University of Liverpool research systematically proved the importance of the endocrine disorders that cause laminitis, which has had a major impact on the equine pharmaceutical industry, informing laminitis awareness initiatives and development of novel therapeutics.

Laminitis is a painful condition of the lamellae (the attachments that provide support between the hoof wall and the pedal bone) within the equine hoof, which affects up to a third of equids (the horse family) during their lifetime. For example, in the UK, an estimated 96,000 horses/ponies develop laminitis annually. Historically, the standard approach to laminitis has been to simply manage the hoof damage. However, the group's research demonstrated that in fact endocrine disease is the most prevalent cause of laminitis, directing efforts towards the investigation and treatment of the underlying cause of the disease. 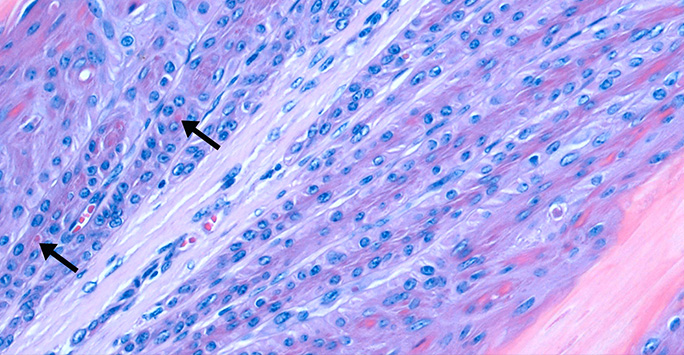 Laminitic hooves under a microscope

We applied clinical veterinary research where the research was informed directly by the horses suffering from laminitis. We used the information the cases gave us to inform various types of research, including endocrinological and epidemiological studies and examining their hooves under a microscope, and this ultimately gave us answers that could change practice. Vets, horse owners and the equine industry are now armed with the tools to detect the endocrine problems that causes laminitis and prevent many cases of crippling laminitis from occurring in horses and ponies in the future.”

In 2007, Professor Cathy McGowan pioneered the experimental hyperinsulinaemic model of laminitis, proving the link between insulin dysregulation (which causes hyperinsulinaemia) and laminitis. However, systematic epidemiological and clinical research was required in order to change industry practice.

Their research revealed the high prevalence and importance of the underlying endocrine diseases, pituitary pars intermedia dysfunction (PPID; formerly known as Cushing’s disease) and equine metabolic syndrome (EMS) that cause insulin dysregulation and the vast majority of naturally occurring laminitis.

The research also revealed that detection of laminitis can be performed earlier with recognition of divergent hoof rings, which is key to laminitis prevention. 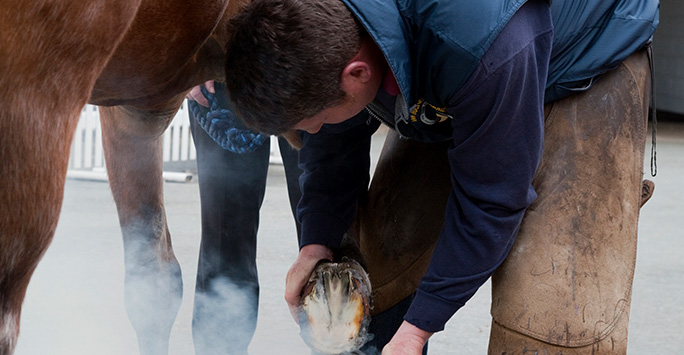 Hot shoeing of a pony to help prevent infection

University of Liverpool research systematically proved the importance of the endocrine disorders that cause laminitis. This research transformed veterinary and equestrian industries’ understanding of laminitis, leading to profound change in veterinary practice, nationally and internationally.

In a 2017 survey of UK veterinary surgeons, 84% reported that their diagnostic approach has changed since they had graduated, with 89% reporting increased use of endocrine testing. Instead of solely addressing the resulting laminitis, the diagnosis of underlying endocrine disease enables the appropriate treatment and the education of owners on effective horse management, with improved outcomes.

This research has had a major impact on the equine pharmaceutical industry, informing laminitis awareness initiatives and development of novel therapeutics.

The identification of hoof rings as a precursor to laminitis has been picked up by the industry, as evidenced by 'Study: Laminitis May Leave A Calling Card Before It Strikes' on The Paulick Report, North America's leading independent Thoroughbred racing website; and shared sites, e.g. the American Farrier’s Journal.

Research at the Institute of Infection, Veterinary and Ecological Sciences