Alexandra Alexandrova studied physics and engineering at the National Research Nuclear University MEPhI from 2006 to 2012. Her specialty is “Condensed Matter Physics” with major subject “Laser Physics”. She has experience with laser interferometers and different laser systems for laser cleaning system for ITER (International Thermonuclear Experimental Reactor) and the Photonic Doppler Velocimeter for measurement of fast process and detecting shock waves in matter.

In September 2012, Alexandra joined the QUASAR group for working within the LA³NET project in the University of Liverpool based at the Cockcroft Institute, Daresbury. The aim of her project is a development of a laser velocimeter for in-detail characterization of the gas jet, allowing for investigations into the jet dynamics itself, probing simultaneously its density, velocity, and temperature.

From October 2015, Alex has been awarded with a Royal Society of Edinburgh/STFC Enterprise Fellowship. RSE Enterprise Fellowships enable promising science and technology researchers to grow into successful entrepreneurs. This prestigious award will allow Alex to focus solely on refining her business ideas, whilst gaining access to some of best commercial training and mentorship available in the United Kingdom.

Based on the work developed within QUASAR group a new company D-Beam has been established to commercialise some of our results. D-Beam ltd provides optical diagnostics which have been developed as reliable and cost-efficient techniques for use at accelerator and clinical facilities, light sources, and reactors. Further details about the company and its offer: http://www.d-beam.co.uk/

Realising the benefits of accelerator science 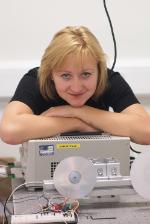