Joseph Wolfenden graduated from the University of Manchester with a Masters degree in Physics in July 2014.  For his Masters project he worked on evaluating the errors induced via the application of numerical methods in the simulation of chaotic galactic orbits. In July 2015 he joined the QUASAR Group and began his PhD studies based at the Cockcroft institute. His work focussed on the development of novel beam diagnostics using both optical and THz radiation. This work involved experimental measurements at KEK (Japan), Diamond (UK), and MAX IV (Sweden). Imaging simulations produced during his studies were produced a publication in an high impact optical journal (doi: 10.1364/OE.27.002988).

In January 2019, Joseph took over the directorship of the beam instrumentation commercialisation start-up company D-Beam. This is a spin out company from the University of Liverpool which aims to commercialise the beam diagnostic related research output of the department.

After completing his doctoral studies in July 2019, Joseph remained a member of the group and began working as a research associate. Alongside his commitments to advertising the current products of D-Beam, he is also investigating the application of a Digital Micro-mirror Devices in non-invasive optical diagnostic methods for accelerator beams. He also has ongoing projects which include THz imaging and laser imaging interferometry. 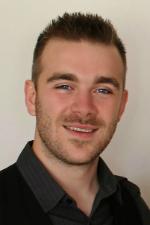