Professor Carsten Welsch studied physics and economics at the Universities of Frankfurt (Germany) and UC Berkeley (USA). He finished his diploma thesis on spiral loaded rebunching radio frequency cavities in 1999 at the institute of applied physics. He then realized a three months research stay at RIKEN (Japan), where he worked on the layout of a magnetic chicane for the CSM project. Back in Germany, he started his doctoral thesis on the technical and particle optical design of compact ion storage rings, which he finished end of 2002.

His further career brought him to the Max Planck Institute for Nuclear Physics in Heidelberg (2003-2004) and as a Fellow to CERN (Switzerland, 2005-2007). He founded the QUASAR Group in the frame of a Helmholtz YIG Award in 2007 and has been leading the Group ever since.

Since November 2008, he is a faculty member at the University of Liverpool and a member of the Cockcroft Institute of Accelerator Science and Technology. In October 2011 he was promoted to Professor of Physics leads the Liverpool Accelerator Physics Group.

Prof Welsch is specialized in accelerator design and optimization, the development of underpinning technologies - in particular novel beam diagnostics - as well as fundamental science and industry applications of accelerators, from high energy discovery machines, to antimatter facilities, medical accelerators and ultra-compact accelerators-on-a-chip.

Prof Welsch has been a partner in numerous national and international research projects and has been coordinator of 9 EU projects to date, amongst which the large scale networks DITANET, LA³NET, oPAC, OMA and AVA, and is also director of the STFC CDT on Big Data Science LIV.DAT. He is a member of numerous international advisory committees and frequent speaker at international workshops and conferences. 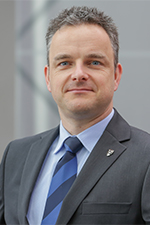