Angus graduated from the University of Liverpool with a Masters degree in Physics in July 2022.

His 3rd year project focused on a particle tracking simulation of muons in the CMS detector of the LHC. For his Masters project, he expanded upon a gap in literature regarding coherent synchrotron radiation (CSR) effects in the final focusing quadrupole magnets of particle colliders. Both projects heavily featured mathematical modelling in Python, which has given him a good background in this area.

Angus started his PhD with the University of Liverpool and joined the QUASAR Group in October 2022. His topic focuses on the continued development and improvement of an optical fibre based beam loss monitor, with a view towards adapting the detector for other applications such as RF breakdown detection and prevention. 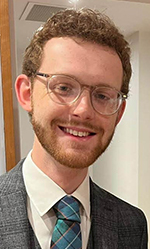