Ondrej Sedlacek studied Applications of Natural Sciences at Czech Technical University in Prague. He graduated in September 2017 with a Bachelor's Degree, and continued his studies until September 2020 when he graduated with a Master's Degree.

During his Master studies, he was a trainee in the Intensity and Tune section in CERN creating and implementing a correcting deconvolution algorithm for per bunch intensity measurements. Later he joined the Beam Loss section in CERN for the development of a calibration method and calibration of diamond beam loss monitors at the LHC.

Subsequently, he spend a year as technical student within the Experimental Area section at CERN simulating an electron beam transport within an electron cooler and an electron hollow lence using Warp framework.

Ondrej joined the QUASAR Group in October 2020 as a PhD student within the Liverpool Big Data Science CDT (LIV.DAT), where he will be working on Beam Induced Fluorescence monitor for high-intensity beams. His research is split between the University of Liverpool and CERN. 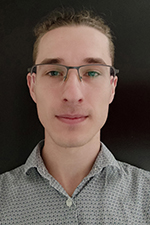