Dr Benjamin Rienacker studied Applied Physics (B.Sc.) and Micro- and Nanotechnology (M.Sc.) at the University of Applied Sciences in Munich (Germany). That was about when he got interested in the field of antimatter research. First working at NEPOMUC, the NEutron induced POsitron source MuniCh at the intense research neutron source Heinz Maier-Leibnitz (FRM II), he soon got involved with the AEgIS collaboration at CERN, who aim at measuring Earth’s gravitational pull on neutral antihydrogen atoms. An intense source of antihydrogen can neither be found on this planet, nor inside the entire universe as far as we know. It has to be artificially created by combining cold antiprotons from the Antiproton Decelerator (AD) facility at CERN, and positrons from an efficient source such as a beta-plus emitter.

In his doctoral studies, embedded in the graduate school program of the Technical University Munich (TUM), he investigated methods to form and manipulate cold positronium beams, a prerequisite for the charge exchange reaction used by AEgIS to generate an intense pulsed source of antihydrogen. He has become a key member of the AEgIS collaboration and has substantially contributed to the first successful production of pulsed antihydrogen in 2018. He led the upgrade of the positron source since summer 2020, while AEgIS was connected to the new antiproton storage ring ELENA. He has been responsible for buying new equipment, taking into account budget constraints and experiment priorities, and he has overseen activities by five staff and students from three institutions, including a number of senior academic staff.

Together with the AEgIS laser group, he established a new method for a fast detection of positronium in flight by means of photoionization and imaging charged positrons on a MCP and phosphor screen assembly. He also developed a next-generation nano-engineered positron/positronium converter target in so-called transmission geometry. In his dissertation, he successfully demonstrated the feasibility of such transmission converters with up to 25% efficiency.

VIP group visits such as the UK Minister for Science, Research and Innovation, or an Austrian Governor, invited talks at various conferences, several publications in top-class journals and lectures about antimatter research complete his portfolio.

He has joined the QUASAR Group in July 2022, linking the ongoing experimental activities of AEGIS to the ambitions of the group, enriching it with frontier research on positronium, antihydrogen and on other exciting exotic antimatter systems. 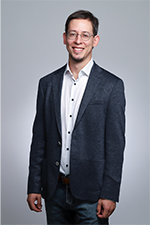