Naomi Smith obtained a first degree in Physics from the University of Manchester after which she started working as an accelerator physicist in the ASTeC accelerator physics group. She worked on the design study for the Diamond Light Source and was involved in the operation of the Synchrotron Radiation Source as well as communication activities such as editing the ASTeC annual report and maintaining the ASTeC website. She also became a STEM Ambassador and became experienced in science outreach activities.

Next she went on to work at Jodrell Bank Discovery Centre as an Education and Events Manager. During her time there she developed and delivered workshops for school children and organised events for families and adult audiences such as Stargazing nights and the Lovell lecture series. She was also involved in the development and delivery of several externally funded projects such as Explore your Universe, Destination Space and Operation Earth

Naomi joined the QUASAR Group Project T.E.A.M. in April 2022 and will be working on the LIV.INNO, LIV.DAT and AVA projects as well as general Cockcroft Institute communications. 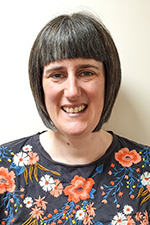