Cristian Bontoiu obtained a Bachelor’s degree in Physics from the Babeș-Bolyai University of Cluj-Napoca, Romania and a Master’s degree in Quantum Physics from Royal Institute of Technology in Stockholm, Sweden. He completed the work for his master thesis at MaxLab on the optimization of beam dynamics of a 1.5 GeV electron storage ring and permanent magnet design of an undulator. After graduation he joined Sincrotrone Trieste in Italy as scientific collaborator for the optimization of the wakefield budget of the FERMI free-electron laser. He continued with a research position at Imperial College in London contributing to the International Neutrino Factory Project. Cristian joined University of Huelva in Spain to perform numerical simulations for the beam dynamics of a heavy-ion linac designed for the European Collaboration on Stable Ion Beams (ECOS) and also for a superconducting gantry for proton therapy. Recently he has gathered experience in designing and building superconducting magnets while working for a private business in the United Kingdom.

Cristian joined the QUASAR Group in 2019 as PhD student of the University of Liverpool and is based at the Cockcroft Institute. He works on the development of a novel method to accelerate particles through carbon nanotubes. This work involves running sophisticated particle-in-cell numerical codes.

Development of a novel method to accelerate particles through carbon nanotubes 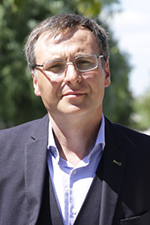