She was an intern student of the Electromagnetism and Electronics Department of the Faculty of Physics from the University of Sevilla, working in the study of MOSFET transistors technologies during the academic year 2018-2019.

Later that year, she obtained a Technical Student position at CERN, where she started working in March 2019 as part of the Beam Instrumentation group, in the Beam Loss section. She was in charge of the analysis of the signals from the LHC Beam Loss Monitors stored in Run 2 (2015-2018), with the purpose of assessing the aging of the monitors due to radiation. Her project also included determining the areas with higher dose rates and the dose dependence on machine parameters such as luminosity or beam intensity. She wrote her degree thesis on this topic, obtaining the maximum grade from the committee and graduating with honours.

She joined the QUASAR Group in September 2020 as a PhD student within a program shared between the University of Liverpool / Cockcroft Institute and CERN, where she will be based. During her studies she will develop a global calibration and loss pattern recognition algorithms for the LHC Beam Loss Monitors, which will be applied in the next LHC run. 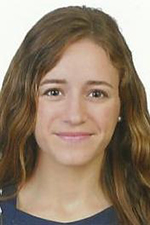