‌A curtain-shaped beam profile monitor has been developed by the QUASAR Group as a least destructive monitor for various types of particle beams. A laser velocimeter shall be used in the future for an in-detail characterization of the jet, allowing for investigations into the jet dynamics itself as well as for benchmarking of numerical simulations.

The task is to measure density, temperature and velocity profile of a rarefied, supersonic gas jet expanding in vacuum. The new sensor should measure velocities of a cold jet in a wide range, up to 2,000 m/s and provide information not ‘only’ about the velocity, but also about density and temperature of any jet.

The sensor will be based on a self-mixing system based on a Laser Diode (LD). In the figure below you can see the operating principle of such system. The scattered target (jet) acts like an ”additional mirror” and the whole system can be seen as a laser with an external cavity of length L, which depends on the velocity of the target. 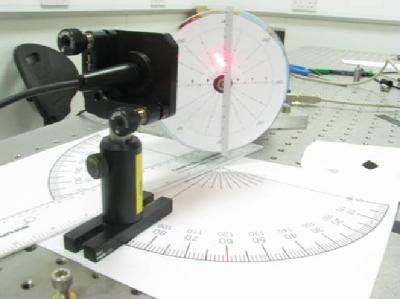 Photo of the current set up which allows measurement of the velocity of a rotating disk.

Self-mixing is a well-known technique which is commonly used for e.g. vibration measurements. In our studies we are interested in reconfiguring and redesigning the method for applications at high velocities. For this purpose, a rotating target has been used and initial measurements at velocities up to 100 m/s were achieved with a rotation disc with high precision (less than 0.1% change in frequency). As a next step smaller targets providing lower levels of feedback were studied.

Laminar flow was investigated by discharging a liquid from a nozzle of a tube aligned horizontally. A mixture of water with particles of different size and shape was used for flow measurements. The constant velocity of the fluid was achieved by using the pump with different flow rate. The pump rates were used such that the fluid was not going to enter the chaotic regime allowing having a stable and measurable reference velocity of the water stream. The experimental set-up was constructed in such way that different parameters can be varied. The velocity of the fluid can be up to 3 m/s without entering the chaotic regime. The seeding material parameters were changed such as the material itself (milk, titanium dioxide) and the size of the seeders (5 µm, 1µm, 150 nm, 21 nm) without changing the viscosity of the fluid. The experiments were done with following seeders:

It has been shown theoretically and experimentally, that the variation of the velocity of the target directly influences on not only the value of the Doppler shift in the wavelength, but the amplitude of the peak of the signal spectrum and of its bandwidth. The laboratory experiments with TiO2 with different diameters (1 µm, 150 nm, 21 nm) showed the dependence of the peak spectrum amplitude from the concentration of seeders with a minimum concentration of 0.03wt% still being possible to measure velocities with better than 3% accuracy. In a next step, we will focus on the characterization of gas flows.

The experimental results of the velocity measurements of the flow of water: the spectrum of the self-mixing signal at different pump rates. The liquid was seeded with titanium dioxide TiO2 with a 1 µm diameter. The velocity of liquid was varied from 1.0 m/s to 1.5 m/s. The amplitude of the spectrum peak decreases steadily with increasing velocity.

This project is realized within the frame of LA³NET. 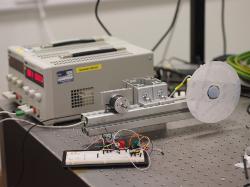