Over a week of street protests in Jordan’s main cities have toppled the prime minister and torpedoed an unpopular tax law. We ask Hannes Baumann: Is this a return of the protest wave that marked the 'Arab Spring' of 2011?

Why are Jordanians protesting?

The immediate cause of the protests was a government tax hike. The tax rise unified middle class and working class Jordanians in their demand for economic change. Jordan is highly dependent on foreign aid to balance its budget. Traditional foreign allies, the United States and Gulf oil producers, have been less generous towards the monarchy because Jordan’s King Abdallah has spoken out against the move of America’s Israel embassy to Jerusalem and refused the hard line against Iranian influence pushed by Saudi Arabia.

The tax hike is part of a wider reform package backed by the International Monetary Fund (IMF). Jordan has embraced globalisation and hosts regular World Economic Forum (WEF) meetings at the Dead Sea to advertise it is ‘open for business’. The glitzy megaprojects that Gulf investors are financing in Jordan have not addressed the country’s deep structural malaise. Ever-higher living costs are hitting not only the poorest but also the middle class. As government debt has reached highs of over 90 percent of GDP, the state is unable to provide all the benefits that have historically kept the population on its side: government jobs, education, welfare, and subsidised food and fuel. The main export of resource-poor Jordan has been its population: Over 700,000 Jordanians live abroad and the wages they send back to their home country equalled 11 percent of GDP in 2016.

Is this a return to the 'Arab Spring'?

The 'Arab Spring' refers to the period in 2011 when protests across the Arab world toppled authoritarian rulers in Tunisia and Egypt and plunged Yemen, Libya and Syria into civil war. Jordan also saw a protest wave in 2011. Contentious politics is not unique to this period. Egypt and Tunisia had seen a rise in workers’ and urban protests since around 2008 but they only reached their peak three years later. The first anti-austerity protests in Jordan kicked off in 1988. Nor did demonstrations suddenly end in 2012. Various Arab countries have seen sporadic protests, including Morocco, Lebanon, Saudi Arabia, and Tunisia.

The current uptick in Jordanian protests is part of a wider pattern. Whether this leads to regime changes or not, Arab politics is no longer just an elite pursuit. 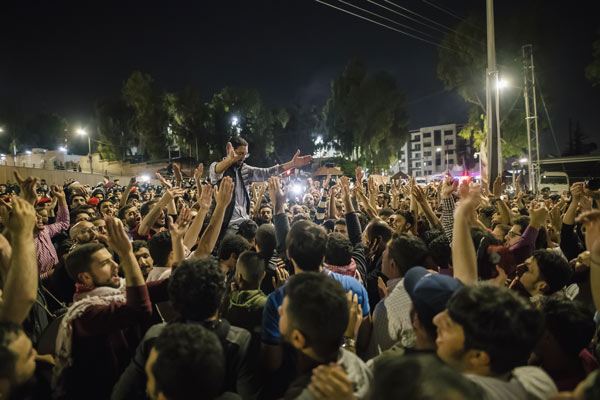 Protests in Amman, capital of Jordan, in response to the proposed revision of the income tax law. Image: Ali Saadi via Wikipedia Commons

Is the Jordanian monarchy in danger?

If political scientists learned anything from the 'Arab Spring', it was that dynamics between protestors and regimes are difficult to predict. Jordan’s protests had an unprecedented quality. They are uniting Jordanians across the political spectrum – including the previously apolitical – and the leadership comes from non-ideological civil society organisations and the youth rather than Jordan’s traditional political parties.

While protestors criticised the King directly, they did not call for an end to monarchy. The regime still enjoys considerable strengths. A $2.5 billion emergency aid package from three Gulf countries has eased the need to impose further austerity measures. Jordanians fear that revolution may lead to chaos seen in Syria or Iraq. The monarchy presents itself as the only guarantor of order in a nation fractured along lines of class and identity. The regime is not afraid to stoke these differences as a divide and rule tactic. If all else fails, there is always force. The response of the security forces to peaceful protests was restrained but under the shell of Jordan’s “modernising” monarchy lurks a hard authoritarian state in the shape of Jordan’s ubiquitous intelligence agencies.

How do you teach Jordanian politics?

Jordanian politics is part of my course on the Comparative Politics of the Middle East and North Africa. We ask why monarchies such as Jordan have found it easier to see off protests than Arab republics such as Egypt or Tunisia. We also examine 'politics from below', which includes protests but also everyday street politics, gender politics and the politics of Islamic piety.