Tomorrow, former politics student, Pete Cresswell, will receive a degree from the University of Liverpool, nearly 47 years after he left here.

Pete's story speaks volumes about how the university sector has changed in that period and about wider political and social change.

1968-72 was a tumultuous period in British universities. Student radicalism had been brewing for years and the Paris student revolt of 1968 inspired a new breed of left-wing student activists. The London School of Economics (LSE) was the focal point, but the rapid expansion of student numbers in the 1960s, particularly in the social sciences, saw student protests spread to universities from Sussex to Liverpool.

Pete will be telling us more about his extraordinary story when he appears on the Politics Hour, our weekly show on Liverpool Student Radio, on Thursday 8 December, starting at 12 noon.

The rise of student radicalism at Liverpool

In 1969, the social science building (now Roxby) was occupied in solidarity with student protesters at the LSE. Later that year, Liverpool students found common cause with tenants in University of Liverpool-owned slum housing and picketed the official opening of the university’s new Senate House building by Princess Alexandra.

In early 1970, events moved up a gear. The spark that lit the flame was the Guild of Students’ invitation to the university’s Chancellor, Lord Salisbury, to attend its annual dinner and ball. Radical students were incensed, because of Salisbury’s support for Apartheid South African and his openly racist views. 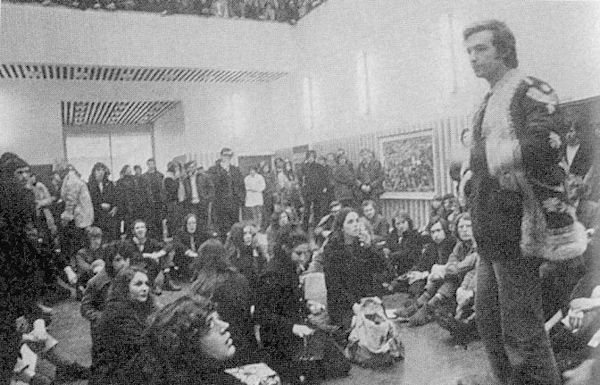 From occupation to expulsion

Events spiralled quickly. A vote of no confidence triggered the resignation of the entire Guild executive. Then, following a mass meeting between students and senior university management on 9 March 1970, a group of students led by Jon Snow, now of Channel 4 News, and Pete Cresswell, occupied Senate House. They remained there for almost two weeks, making five demands, including that Lord Salisbury be removed from office.

Ten leaders of the occupation were subsequently brought before the university’s board of discipline and found “guilty of conduct which was detrimental to the discharge of the duties of the University”. Nine students, including Snow, were suspended from their studies for up to two years. Creswell faced an additional charge of using force to prevent the University registrar from reaching his office and was expelled in April 1970. 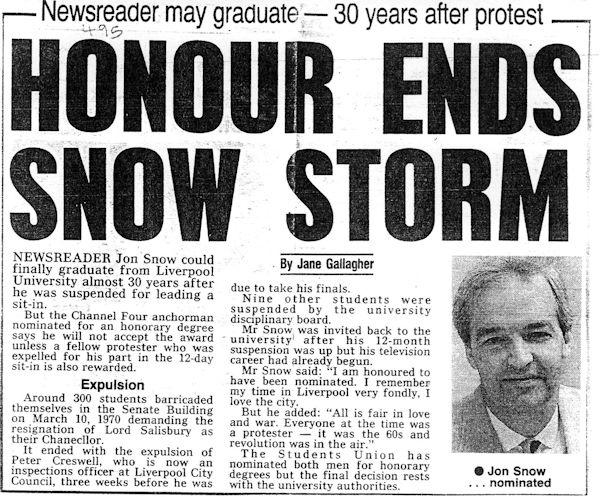 On the right side of history

Other than Snow, the suspended students returned to finish their degrees. Cresswell was never permitted to return, even after initially securing a place to study social work many years later. He stayed in Liverpool, working as a bus conductor, a hospital porter, a community worker and a social worker (having qualified from Liverpool Polytechnic).

Snow and Cresswell have always maintained they were on the right side of history and, from the standpoint of 2016, it would be hard to argue with that assessment. They have always stuck to their guns. In the 1980s, Snow declined an honorary degree from the university, indicating he would not accept one unless Cresswell was also honoured.

Slowly, relations thawed, as one generation of university leaders were replaced by another and changing political and social attitudes vindicated the stance taken by the student protestors in 1970. In 2011, Jon Snow received an honorary degree from the university and now, in 2016, it is Pete Cresswell’s turn to do so.

We are absolutely delighted that Peter has agreed to join us on the Politics Hour, our weekly show on Liverpool Student Radio, to talk about his experience. You can listen to the show at http://lsradio.co.uk/ on Thursday 8 December starting at 12 noon.  You can also follow the Politics Hour on Twitter, for updates during the show.